Houghton – Mill on the Ouse

There has been a mill here on the Great Ouse for more than a thousand years (Domesday records), but what we see today dates from roughly 17th Century, with some 19th Century additions. It is now owned by the National Trust and in season (not yet – see NT website) is still a working and visitable mill. I went to check out the views for photography, but the weather was against me so I didn’t really get anything.

I did wander around the quaint village of Houghton afterwards though and enjoyed the mis-match of old and modern. The village ‘Green’ is a cluttered affair with thatched clock tower, red phone box, a pump, smart sign posts and cars (impossible to avoid in any shot). The village itself contains a number of grade II listed buildings, including Number 1 , The Green (which just about appears to the right in the photo from the Green below): 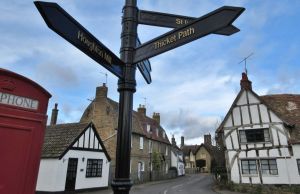 There is a brilliant, old-fashioned garage, Beer of Houghton, which seems to specialise in MG cars and has a front yard littered with them, in various states of disrepair.

On the edge of the Green and end of Thicket Road is Houghton Tea Rooms, which was a suitable place to warm up on a freezing day. I was very grateful for the mug of hot tea. They also sell many homemade cakes (hope you like butter icing!)

Living in the damp middle of nowhere
View all posts by Frogend_dweller →
This entry was posted in Out and about and tagged Cambridgeshire, Great Ouse, Houghton, Houghton Mill, Mill, National Trust. Bookmark the permalink.