Bullying on the bird feeders

I’ve been surprised by the size of some of the visitors to the bird feeders over this last week. No, I don’t mean that they are overweight or anything, just that they are bigger species than I am used to seeing there.

First there was the illusive greater-spotted woodpecker. No issues with him of course. We hope to see more of him. 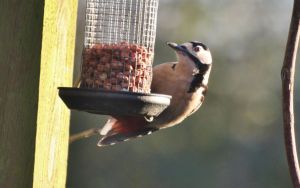 Next, there was a jay. I was worried for the small birds around, but he seems fairly single-minded about the peanuts and they carried on regardless. I am not sure how long the feeder will last after his attentions though! To be fair, the last sunflower seed feeder was wrecked by the great tits pecking at the holes until they were so large the thing was useless.

Jay on the peanuts

Then there has been a hawk around, landing on the arch next to the feeders. He certainly frightened off the other birds. There is evidence that something caught and plucked what may have been a collared dove on the other archway in the garden. Maybe the rooks will drive him away now that they are nesting, like they have done with the buzzard.

Finally, the black squirrel is back with annoying regularity and he seems to be very dexterous. 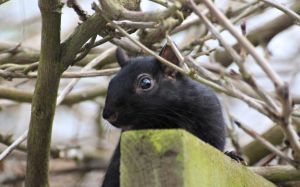 I guess that if you decide to encourage wildlife into your garden you will get all sorts. You can only make sure that there is enough good protective cover to give the small things a chance.

Living in the damp middle of nowhere
View all posts by Frogend_dweller →
This entry was posted in Nature, The home garden and tagged birdfeeders, bullying, Jay, Squirrels, Woodpecker. Bookmark the permalink.