Daffodil Festival: A Celebration of Spring

At this time of year, if the weather didn’t hold them frozen in the ground in February, hosts of golden daffodils line the streets of Thriplow welcoming the thousands of visitors who descend on the village to see the spectacle.

Verge side daffodils in Thriplow

Thriplow is just south of Cambridge and has hosted an annual daffodil weekend since 1969 raising money for an impressive number of charities. The residents plant more daffodils each year, trying to cover early and late varieties, to improve the display and allow for the vagaries of the weather. This weekend marks the 47th Daffodil Festival and supports the Beads of Courage programme at Addenbrookes Hospital.

Morris dancing next to The Green Man pub in Thriplow

In truth though, over the years, the daffodils have become more symbolic and not just when they are held back by bad weather. There are places where the verges burst only sporadically with their yellow gems, whole clumps having gone blind. Also fewer private gardens seem to be open for wandering around, but may be they just rotate round the possibilities over the years to spread the load. The festival has certainly had to become better organised and orchestrated to deal with the numbers of visitors to what is a small village (with a population of roughly 450). Instead, the event has turned into a veritable celebration of spring, local food, music and rural crafts. 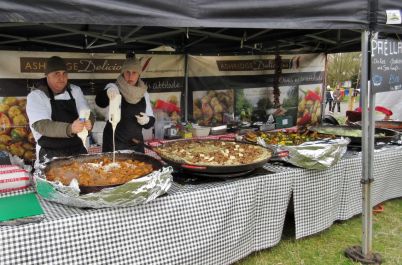 In the end, celebrating spring more generally is no bad thing and I didn’t come home empty handed either!

Living in the damp middle of nowhere
View all posts by Frogend_dweller →
This entry was posted in Out and about and tagged Daffodil Weekend, Daffodils, Morris dancing, Spring, Thriplow. Bookmark the permalink.

2 Responses to Daffodil Festival: A Celebration of Spring