… Or at least a stairway to the walnut tree  and seat at the top of our little hillock.

And what better way to spend a blustery Sunday afternoon than to carve a staircase into a hillside. I am exaggerating, of course. The hill is a turfed spoil tip in the corner of the garden and the carving was done by simple digging into the compost, clay and stones. Nevertheless, there is now a new route to the top of the mound.

Primroses at the bottom of hillock

It all started with a renovation of the raised vegetable beds. Several railway sleepers were removed and an archway became redundant. (This is all part of the long term plan to fence the vegetable area to avoid the continuous consumption of produce by the local wildlife). I suggested moving the archway to the end of the wild meadow area as a kind of trompe l’oeil, to pretend that there was more to see beyond the arch. I quite liked the effect, but with the sleepers sitting around unused it became possible to do even more with the area. 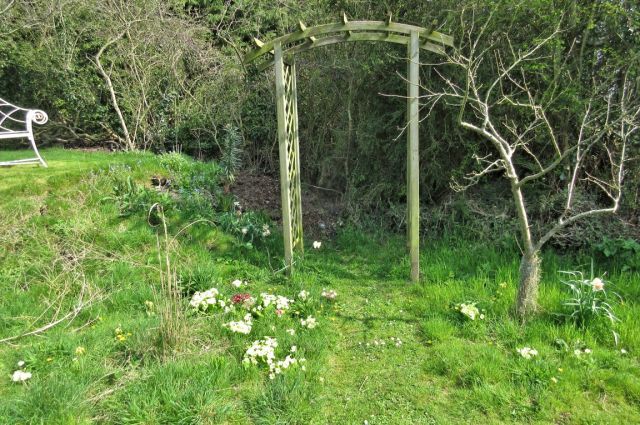 Arch at the boundary of the wild meadow and garden

So out came the circular saw and in no time at all the sleepers were halved and ready to be embedded in the slope. That meant a bit of digging was required on my part, but as I said earlier, there’s no better way to garden on a blustery day.

Sleepers forming the stairway to hiltop

The spoil tip is still changing at the edges, but the approach and flat top are fixed for now. At the top and middle of the hill is a walnut tree that was planted about 12 years ago. It was a leftover offering from the plant stall at a school fête and I love it. The tree has had walnuts for the last two years, but since the garden is full of squirrels I am never expecting to see any of those make it to the table (unless I pick them in June/July for pickling/glacé-ing). We’ve put a chair in front of the tree to make the area welcoming.

Now you can get to the seat and tree through a meadow patch that leads to an archway that winds its way up the back of the garden. I like the idea of wandering a zigzag through the flowers rather than walking a straight path when I have a chance.

So all that remains to be done is a bit of tidying and landscaping, also we might need to anchor the sleepers more reliably (maybe with stakes) if they don’t settle well. All in all, a good afternoon’s work!

Living in the damp middle of nowhere
View all posts by Frogend_dweller →
This entry was posted in The home garden, Trees and tagged hillock, sleepers, Walnut tree, wildflower meadow. Bookmark the permalink.

3 Responses to Stairway to Heaven ….