Guilt and the nesting birds

Well, we are definitely in bird nesting season.

I know, because I managed to unintentionally disturb two different birds today. The first was a robin and happened when I was rooting around the pots stacked along the side of our greenhouse looking for a module tray to use to transfer some plants to work. I picked up a couple of different sized trays only to have a bird explode away in a flurry of wings. I am fairly certain it was a robin from its size, the way it moved (and in retrospect because they nest in such funny places, don’t they?) When I looked down I saw a perfect, round nest filled with a cluster of eggs. So I quickly replaced the trays and backed away from the area. I can only hope that I’ve not scared it away completely and that the nest will continue to be used. I feel guilty and frustrated that there is no way to check that things are OK. I will just have to look up the nesting cycle to find out how long robins sit on eggs, feed young and then I’ll add a couple of weeks for safety, before I return to the stack. 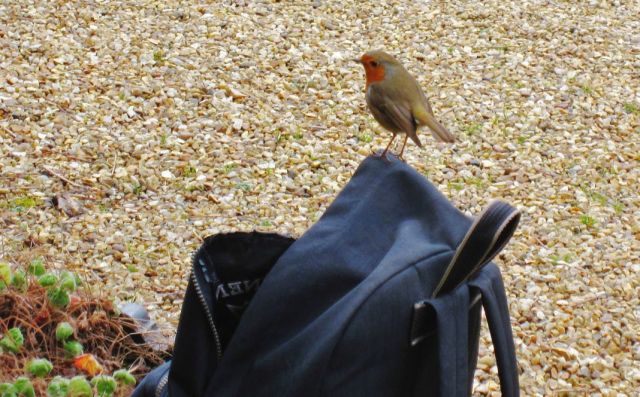 Robin watching for worms from my bag

The second encounter was not so dramatic or as likely to have dire consequences, but it did reinforce the fact that nesting is going on everywhere right now. I was working in the yard at Wimpole getting stuff together to pot on some seedlings, when I noticed a pied wagtail on the ground near a puddle with moss and twigs in its beak. It was clearly collecting to build a nest. We watched it fly off and continued with our work. A short amount of time later I was collecting pots (again) from the open-sided bothy, when I heard wing beats close behind me and then a rapid change of direction. I emerged to find the wagtail on the bothy’s slate roof waiting for me to leave the store. It continued to watch me as I crossed the yard. I stop at the other side and took this photo. There are people in and out of this store all the time, so I don’t think I fazed the bird at all. In fact, at this time of year there is a note on the inner door reminding people to keep it closed at all times otherwise we get swifts nesting inside. 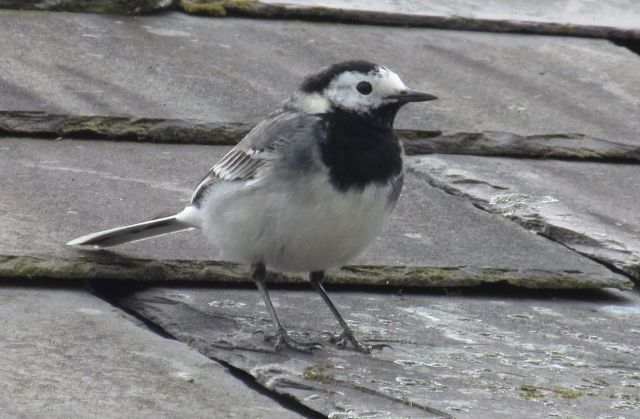 Pied wagtail on bothy roof, waiting for the coast to be clear

So, things I learnt today were to watch out for nesting birds from here on out and to store pots behind closed doors.

Living in the damp middle of nowhere
View all posts by Frogend_dweller →
This entry was posted in Nature and tagged birds, Nesting, pied wagtail, robin. Bookmark the permalink.

4 Responses to Guilt and the nesting birds