A Walk to the Bronze Age Barrows on Therfield Heath

Minus numbers on the thermometer this morning meant that gardening was not a good option first thing, but with bright blue skies and sunshine it was ideal walking weather, especially with hardly any wind.

Therfield Heath. To the left is grazed common land (watch out for horses being ridden here). To the right is a popular golf course. Right up the middle is the public footpath. Hazards both sides!

Sometimes I long to get a bit of height with some views and one of the best places to do this is locally is Therfield Heath, near Royston, Hertfordshire. Therfield Hill, at 168m, is the highest point for 12 miles in all directions and looks down on the ancient Icknield Way. In the summer a fun kite flying festival is held here.

Therfield Heath has been grazed common land for many years and is a biological SSSI (Site of Special Scientific Interest) and nature reserve. It is located on a chalk escarpment, which was formed in warm seas 100 million years ago and tipped towards the south east when the Alps were formed (20 million years ago).

The heath is situated on a tilted chalk escarpment

The trail can be pretty sticky and slippery to walk on when wet, but with today’s cold, icy start it was absolutely fine.

Neolithic farmers started clearing the land here for agriculture ~six thousand years ago. There is a long barrow at the top dating from this period. Since then the area has been continuously open land, where grazing keeps the shrubby hawthorn etc. at bay. The heath has been used extensively for everything from medieval tournaments, military maneouvres, rifle ranges to currently golf courses and sports fields.

When we come for the Kite festival the heath is covered in typical chalk land wildflowers: harebells, scabious, toadflax, vetches and supports colourful burnet moths and blue butterflies, including the rare Chalkhill blue.

At the top of the hill, near the trig point, you can see some obvious round ~2m high mounds. 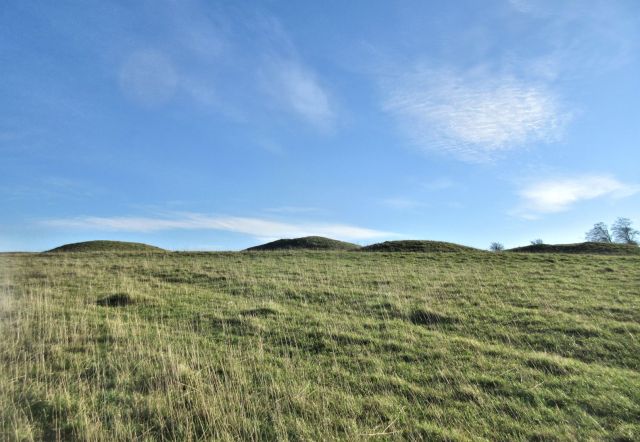 There are more of these round mounds scattered about the heath, but these five are tightly clustered and give the area its name, Five Hills. They are bronze age round barrows and, in my opinion, you get the best views from them.

Looking west from Five Hills towards Baldock. Bronze age barrows in the foreground, golf bunkers and teeing areas in the distance.

All very bracing. It was wonderful.

We walked on to the trig pillar which labels some pretty random destinations:

But then it is always useful to know where Land’s End is, isn’t it?