And now for something completely different …

We’ve been away for a few days, desperate for some warming sunshine and fresh sea air, to a curiously quiet part of the Kent coast.

As a child I had several family holidays in Margate and I had made a mental note to never go there again. However, when looking for a beach-based getaway location I found Botany Bay, Broadstairs. It is just round the corner from Margate, but it looked enticing: secluded sandy beaches, cliffs with chalk stacks and arches, plus seaviews and wildlife aplenty. So that is where we have been and it was even better than advertised.

The vegetation on the cliffs wasn’t as advanced as I had expected given the winter/spring that we’ve been having. Even so, it is currently a green froth of Alexanders,  Smyrnium olusatrum. 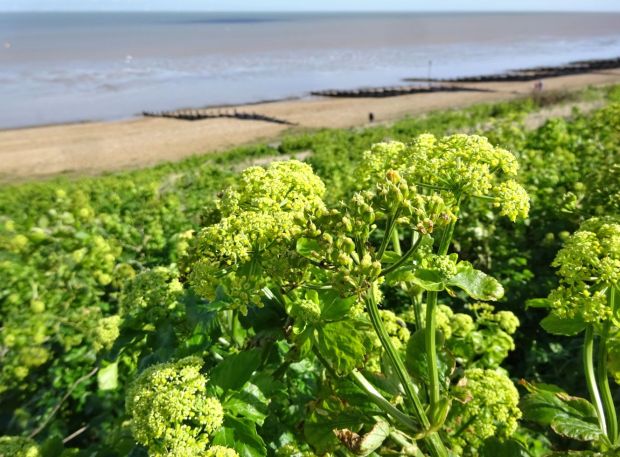 Alexanders was introduced to Britain as a pot herb by the Romans, but it now grows wild all over. It seems to thrive in coastal environments, along cliff paths and on the foreshore. Roger Philips describes foraging for it in his ‘Wild Food’ book and the Eden Project share recipes for every part of it. It is supposed to taste something between celery and parsley, but I’ve not tried it because I’ve yet to find a plant that looks as fresh and tasty up close as it does from a distance. (Also I was not impressed with Parcel when I tried to grow that and I imagine that Alexanders is very similar.)

An information board on the path says that another notable plant growing along this bit of coast is the rare Hog’s fennel, Peucedanum officinale. It is a tall (up to 2m) umbellifer which grows exclusively in coastal grassland. It is too early in the season to see this yet (it flowers July/September), but there were some dried stalks left over from last year’s crop I think. They make good stopping perches for the birds flitting along the cliff edges.

Corn Bunting with the Thanet Offshore Wind Farm in the background

The white cliffs around Botany Bay and Kingsgate Bay are high and full of dramatic features such as this chalk arch, which disappointingly seems to be unnamed.

And these chalk stacks at Botany Bay (also unnamed – they should take tips from Studland Bay): 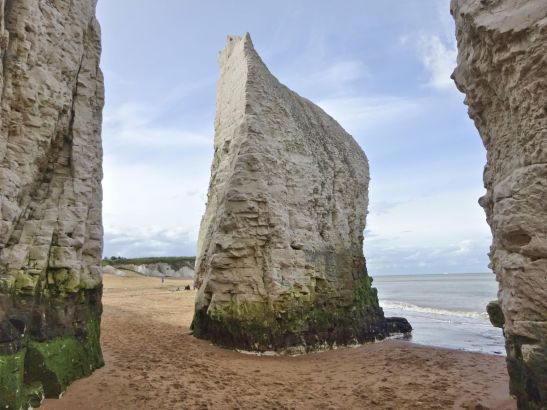 And a warren of natural and man-made caves used by smugglers, including the infamous 18th century smuggler Joss Snelling and his gang. The next bay round to the east takes its name from him.

At low tide you can walk from bay to bay along the beach, from Margate to Broadstairs, spotting wildlife amonst the rockpools, like this ringed Turnstone.

Turnstone in the rockpools

I think I saw his colleague enjoying a bath in a puddle on Broadstairs harbour:

On our final morning we were treated to a spectacular sunrise:

All in all, a very good break. Hope that your Easter holidays have been fun too!

Living in the damp middle of nowhere
View all posts by Frogend_dweller →
This entry was posted in Nature, Out and about, Wildlife and tagged Alexanders, Botany Bay, Chalk Stacks, Cliffs, Coast, Kent, Photography, Smugglers, Thanet. Bookmark the permalink.

20 Responses to And now for something completely different …