In a Vase on Monday – Shaded by honey lilies 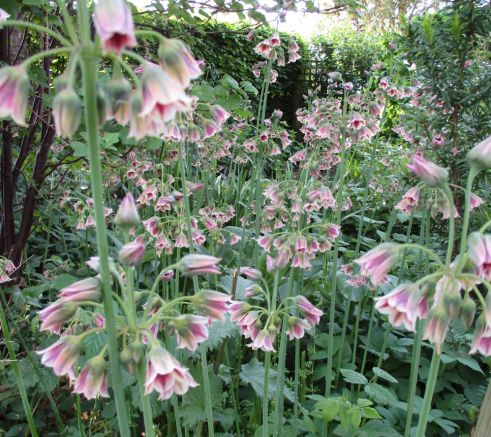 I have a large patch of honey lilies (Nectaroscordum siculum) in the front garden that poke determinedly through the assorted ground elder and brambles that I spend my life fighting. They seed around freely and I’ve been very happy to find something that thrives in the dry shady conditions under the large field maple that stands there in the middle of the boundary. I love their muted colours and their gradual transformation from dangling bells to upright candle sticks as the flowers fade, so I thought I would base a Monday vase around their drama. 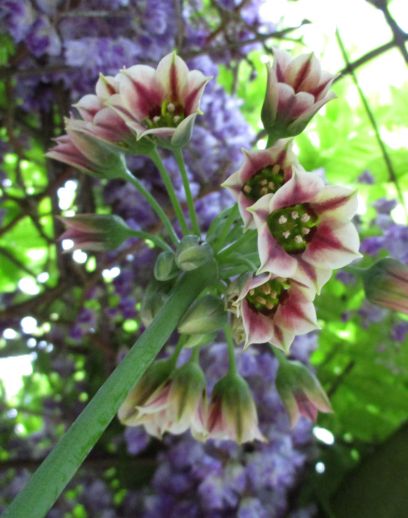 Initially I wasn’t sure which other flowers to put with them, since a lot of the other plants around the garden seemed too bright and overwhelming. So I’ve largely gone for bruised purples, mauves and white, with most of the frothy, pastel colour coming from aquilegias.

I set up the flowers on the table under the wisteria-covered pergola and with the dull light today the vase seemed to be illuminated in a suitably tinged lavender haze. 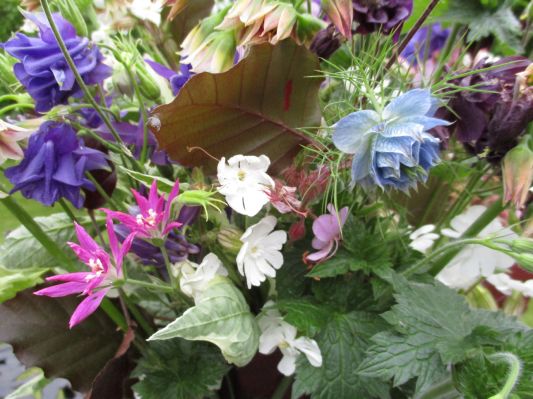 I added a few pieces of geranium (G. macrorrhizum and a variant of Geranium x oxonianum ‘Thurstonianum’ I think), white campion and nigella to lift the heavy tones.

Then I cut a handful of dangling copper beech twigs, for dark foliage, from the hedge that is in imminent need of trimming.

Finally, it occur to me that the table on the lawn had the best light and would show the colours up more clearly. So here is the vase once again, revealed a little more brightly I hope!

My thanks to Cathy for hosting her popular In a vase on Monday meme. There are some wonderful bright and beautiful contributions for you to see there today.

Living in the damp middle of nowhere
View all posts by Frogend_dweller →
This entry was posted in Flowers, The home garden and tagged bulbs, Gardening, Honey lily, In a vase on Monday, Nectaroscordum siculum, Purple. Bookmark the permalink.