So to cheer myself up, I went on an orchid quest …

Having accidentally found a patch of bee orchids in a meadow full of ox-eye daisies the other day,

I realised that now is the perfect time to be looking out for other native orchids. What better way to put aside the melancholy caused by our recent referendum. I’ve seen enough analyses of who voted for what and read the worrying forecasts from the scientists, researchers, businesses, banks etc. and I’ve signed the protest petition. So now seems to be a good time to adjourn to the great outdoors and lose myself in flowers.

Fortunately for me, the best place to search for orchids nearby is the old chalk quarry at the edge of the village and, apart from getting completely drenched while I wandered around looking for the best shots, it was a spectacularly successful walk.

Orchid filled chalk pit (sorry about the rain on the lens)

The ground was covered by the best display of common spotted orchids (Dactylorhiza fuschii) that I have ever seen there. They weren’t just more numerous, but also, I think, on average they were taller and more vigorous. 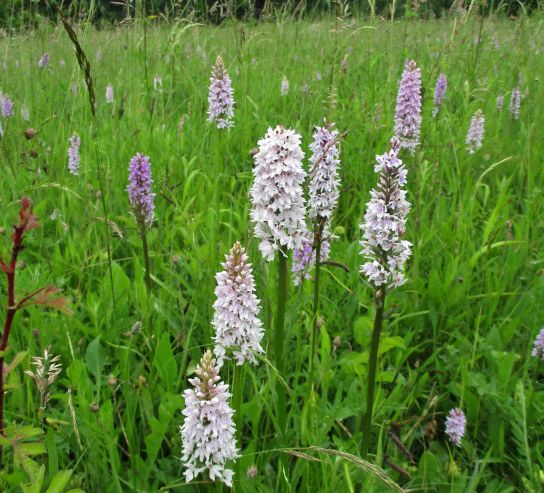 Many of them were quite pale, but others had beautiful strong colour and markings. 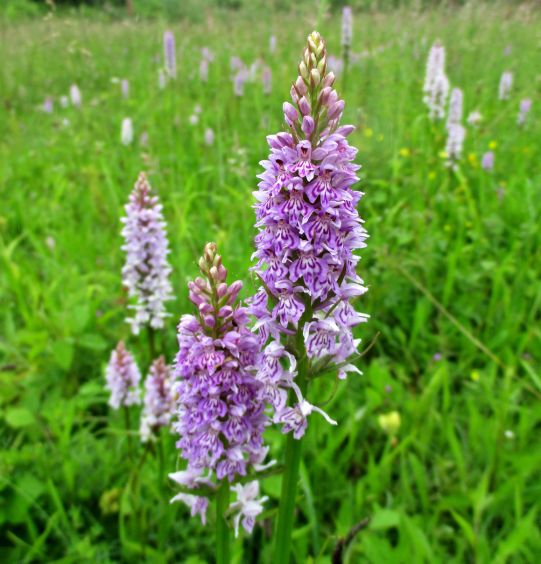 The pit is also filled with twayblades (Neottia ovata), but since they are predominantly green they don’t stand out in general photos of the ground.

In fact, they are hard to see even when you are looking directly at them. Up close, the flowers are distinctly shaped like little people. 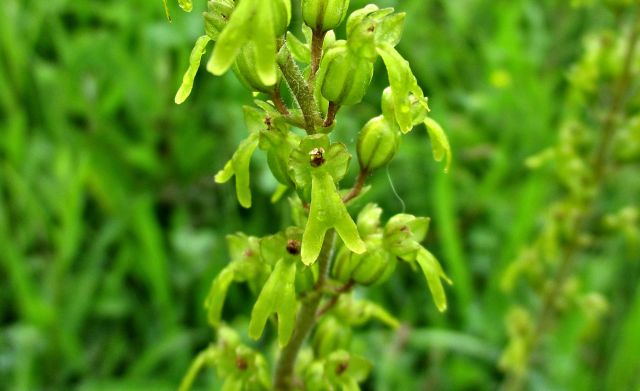 Twayblades take a long time before they are mature enough to set seed (7-20 years), but they will often form clumps via vegetative reproduction and they can survive for over 40 years.

There is another native orchid which is even more human-shaped, this is the Man orchid (Orchis anthropophora) which does also grow in the local chalkpit, but it was very under-represented this year. I did see a couple of spent spikes and they do flower somewhat earlier than the others, so I am hoping that they just withered and disappeared in the damp conditions.

Bee orchids were there too and I am pleased to have seen them in reasonable numbers in the pleasure grounds at Wimpole Hall as well. So that is three places, with good populations, within a few miles of here. 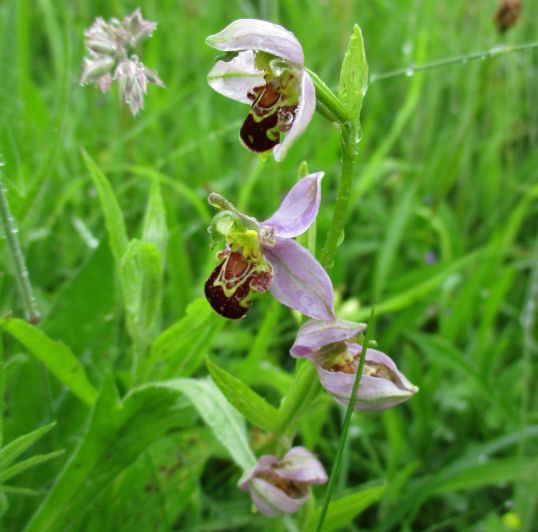 Did you know that in the Language of Flowers the bee orchid stands for error and industry? Not sure that you’d want to see that in your bouquet!

The final orchid I will show in this post started flowering over a month ago. I returned to Fox Covert near Therfield to look for a colony of white helleborines, Cephalanthera damasonium, that are known to grow there. White helleborines flower typically from early May to the end of June. 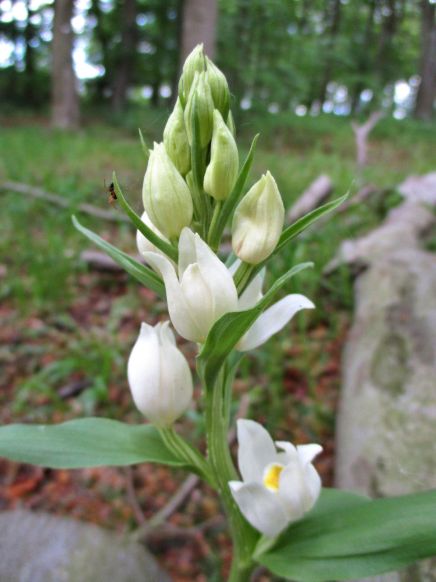 White helleborine under a beech canopy

I visited a few times in May, but the flowers only started to open up towards the end of the month this year. 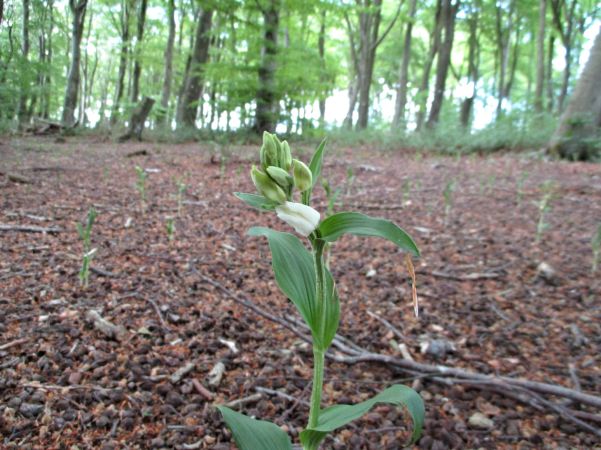 In this photo you can just about make out the individual spikes popping up out of the beech kernel-covered floor of the wood. The beech canopy has filled out completely and the whole atmosphere in the wood is slightly murky and green. In fact the degree of shade means that this orchid is often the only plant growing beneath the dense canopy.

Living in the damp middle of nowhere
View all posts by Frogend_dweller →
This entry was posted in Flowers, Nature, Out and about, Wildflowers and tagged Bee Orchid, Common Spotted Orchid, countryside, Gardening, Orchids, Photography, Twayblade, White helleborine. Bookmark the permalink.

10 Responses to So to cheer myself up, I went on an orchid quest …