The air is shimmering with wildlife. It has got to the time of year when it is hard not to breathe in an invertebrate or two if you are working or walking outside. In the borders the buzzing is a lot more scary when you are bent over with your head in the flowers, dead-heading or weeding, because bees and hoverflies seem to drawn to headfuls of hair in an unfathomable way.

Insects seemed to start appearing this year in increasing number some time in June. Suddenly there were flying insects everywhere. How fortunate for these winsome youngsters:

Baby blackbird looking so funny without its long tail.

Baby swallows anticipating the flyby of a parent bearing insects

Dog walks by the river have become much more entertaining with the dragonflies and damselflies on the wing. They flit ahead of you always just out of focus! Unfortunately for this fellow a cobweb was hung across his escape route and he became entangled as he moved away from me.

I managed to unravel the sticky silk and he flew away untroubled (I had caused his problem after all). Luckily, as I climbed back up the bank I encountered another beautiful example basking in the watery sunlight and he stayed still enough for a photo. 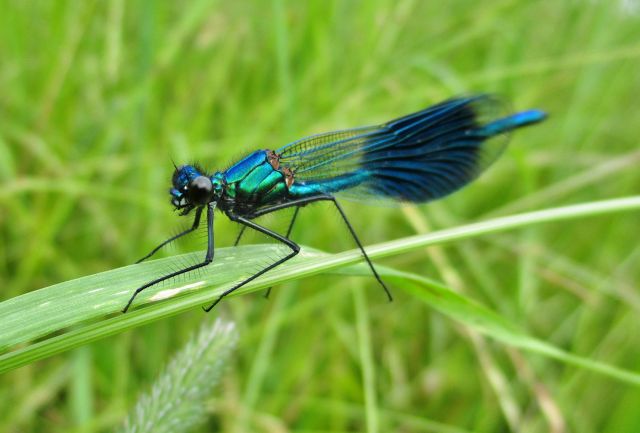 Away from the river, in the long grass, brown butterflies are becoming more numerous and add to the scintillating feel of the air. There are even butterflies in our small meadow patch in the garden now,

including the rather lovely Ringlet:

Ringlets have a dark velvety wingspan and distinctive circles on the undersides.

Another common butterfly in the meadow, most often seen on the knapweed, is the Large Skipper. Males have thick black line through centre of fore-wing and frequently perch in the sun waiting for passing females. Brambles are a favourite food source.

The last little brown butterfly that I am seeing a lot of on walks and in the garden is the Speckled Wood. It haunts the shady alleyways between fields and the ivy in the hedge around the garden.

As for the smaller winged insects, like hoverflies and flea beetles , one of the most attractive flowers to them in the countryside just now is common hogweed. The flat flower heads are positively loaded with all manner of flies:

The developing seedheads are wonderfully geometric and will become part of the distinctive winter landscape, as a lacy edging to the fields and as anchors to frosted cobwebs.

I am linking this post with Tina’s Wildlife Wednesday meme, which is 2 years old today apparently. Happy birthday! It is a lovely focus to have once a month. Long may it continue.

Living in the damp middle of nowhere
View all posts by Frogend_dweller →
This entry was posted in birds, Nature, Wildlife and tagged Banded demoiselle, butterflies, countryside, Insects, meadows, Photography. Bookmark the permalink.

A Blog About Gardening Plus A Little More

Thoughts about life, living, and gardening....

STOPS ALONG THE WAY

The wildlife of a small market town...