This weekend I’ve been counting butterflies in the garden. It’s for this year’s Big Butterfly Count (15th July – 31 August run by the Butterfly Conservation Organisation). For 15 minutes on each day I’ve wandered past the buddleia bushes on the driveway, the cabbage plants in the vegetable plot, the teasel/knapweed in the meadow patch and generally round and about the bramble infested boundaries to see which species are about.

Happily, there’s been some sunshine and I’ve been able to record a few of the most common butterflies, so this year is not the total butterfly washout that I feared a month ago.  One of the bases of the survey is that butterfly numbers react quickly to changes in the environment, making them a useful biodiversity indicator.

Those distinctive and beautiful eyespots on a Peacock butterfly

Our pale purple buddleia is being regularly visited by a number of red admirals and peacock butterflies, as might be expected, but the dark purple bush is strangely butterfly free. It is the same every year, until the flowers on the pale bush fade and the dark one takes over.

The vegetable plot is unfortunately proving to be a magnet for the large and small white butterflies that seem to drift through the garden in waves. They have been by far the most numerous butterflies that I’ve recorded for the survey so far. 😦

At the ‘less seen’ end of the spectrum, I’ve spotted several Silver Y moths in the last couple of weeks (which is one of the species highlighted on the downloadable chart) and in the hedgerow, near the flowering brambles there have been several gatekeepers tumbling in the air together.

A Gatekeeper with an apparent Mallen streak

Gatekeepers are tricky to photograph, because they don’t settle for long anywhere. In fact, the brown butterflies in the meadow are hardest to count and identify reliably, because they never stop moving. They seem to slip between the blades of grass like X-wing fighters on a trench run to the Death Star. 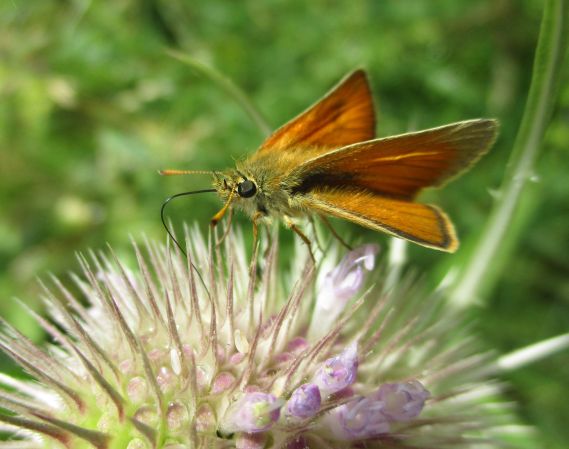 Yesterday I found a skipper butterfly on the knapweed that I was a puzzle. The markings weren’t right for a large skipper, so I looked it up and it turns out that the Skipper family is much larger than I knew. Subtle differences mean that you really have to see tops and undersides of wings etc for a proper ID. I didn’t, so my best guess (with a photo of the undersides) is that it was a small skipper. I included it in the submission, but should I have?

This year’s butterfly survey is a very accessible affair, because a free smartphone app is available to record the sightings. Participation is incredibly easy, wherever you are (the app knows if you let it!), so long as you can get outside and spare 15 minutes. You record the maximum number of each species that you see at any one time, over that period. Then submit the results. The app also provides species information, so it is easy to check if there is any uncertainty over an ID or confusion about particular markings etc. The website has a page for Results so far … which is a fun thing to monitor. You can check what people around you are spotting or discover local hot spots of interesting species.

So if you have a small amount of time to spare, why not use it to count butterflies?

Living in the damp middle of nowhere
View all posts by Frogend_dweller →
This entry was posted in Nature, The home garden, Wildlife and tagged Big Butterfly Count, butterflies, Gardening, Photography, Skippers. Bookmark the permalink.