We’ve been away and I am sure that I am not alone in that the first thing that I do on returning is to run around house making sure that all the indoor plants have survived, giving any drooping specimens a quick glug of water. The large pip-grown citrus tree had been moved upstairs to occupy the bath, together with a bucket (now empty of water) and strips of damp capillary matting. But the tree seems to be doing fine. In fact it is more than fine, since it is bursting into flower for the first time ever.

The first flowers on my citrus tree

The next thing that I check is the state of the plants in the greenhouse, but daylight had gone and it was hard to see very much. A friend had watered while we were away, but nevertheless I had the impression of a few fried and shrivelled looking things in there (things that, in truth, should have been growing in the garden). So I gave everything a good douse with a watering can and I retreated for the night. Inspecting the vegetable patch would have to wait until morning, but it was already pretty clear that the rain that we had had on holiday had not made it to Cambridge (how annoying!).

Next day started bright and sunny, but windy. It was time to look over the vegetables and the rest of the garden.

The good news was that there were only a few casualties to slug damage: a couple more cow bean plants have disappeared and a few of the tomatillo bushes have had branches sheared off or main stems chewed through. 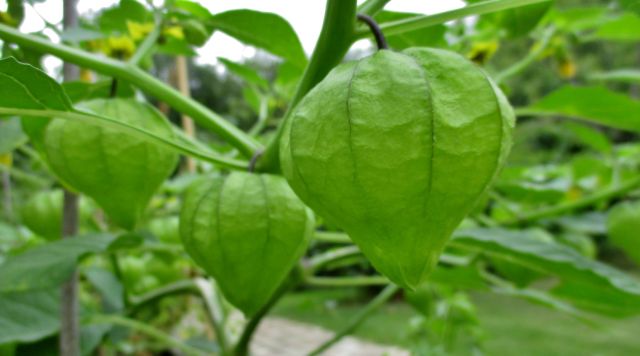 The tomatillos are still mostly tiny in their husks, but should be a good harvest

I also noticed that various things have suspended making any new growth until there is more moisture available: the beetroot and red-veined sorrel, in particular, are frozen in time.

Elsewhere, I have an abundant harvest of beans, except runner beans – also suffering from the dry conditions.  My favourite this year is a flat climbing bean called ‘Golden Gate’, which is positively dripping yellow pods. They are deliciously buttery when cooked. 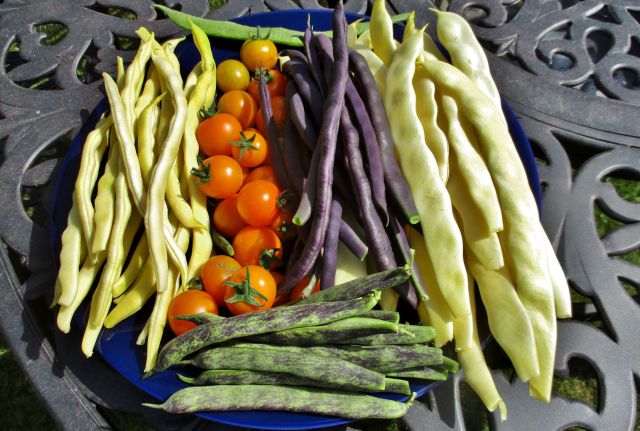 Only one runner bean, but plenty of other colourful climbers

And then there are the courgette plants. They’d not been cropping before we left, but we came home to quite a few marrows.

I don’t like marrows, too bland and watery, so I gathered them up and put them out the front with a sign for people to help themselves. They’ve gone already, but there’s still plenty of courgettes ready and coming. I am trawling the internet for inspiration on using them up, so any ideas would be welcome. I’ll probably make courgette cake again and my son has suggested making ribbon courgette pasta which sound like a brilliant plan.

Hoping your harvests are tasty and prolific as well!

Living in the damp middle of nowhere
View all posts by Frogend_dweller →
This entry was posted in Food, The home garden, Vegetables and tagged Beans, Courgettes, Gardening, Harvest. Bookmark the permalink.