Posted on November 2, 2016 by Frogend_dweller

Seed eaters are finding the living easy this month. Unmown thistle stands at the field edges and in set-aside areas are seething with noise and activity. Goldfinches fly up in droves when I walk passed with the dog, but they settle back quickly. They are bright, vocal, gregarious birds and are often seen in large flocks. 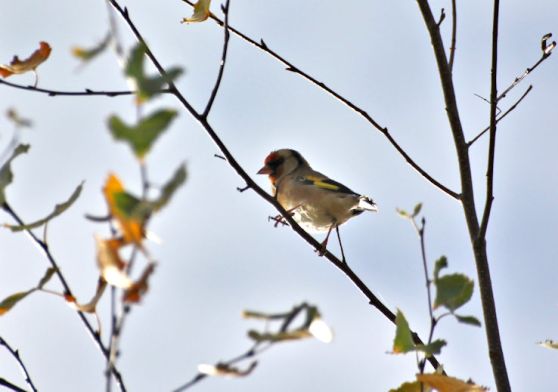 In the garden they are hanging out around the very tops of the trees and hedges, shifting around incessantly. It is only now, with the birch and hawthorn rapidly losing their leaves, that they are easy to spot with their distinctive red faces and flashes of gold on their wings.

Apart from the birch seed, what they are most interested in in the garden are the few multi-headed sunflowers (the lovely Valentine) that made it to flower this year and the teasel plants in the meadow patch. Their long thin beaks are particularly suited to extracting seeds from such prickly seedheads.

Their cousins, the greenfinches, are also busy on the sunflowers in the borders. They blend in so well that I felt it necessary to add the red arrow above to point the finch out (nb. he is upside down). Greenfinches are much less numerous than the goldfinches around here. In fact, they have suffer major losses all over the UK (first recorded in 2006) due to the disease trichomonosis.

One thing that brings the birds to our garden without fail are the water sources. Below is our oldest bird bath and it is in constant use. Particularly with the dry weather we’ve been having this autumn. There was no rain of any significance during October and I’ve found that I need to re-fill the bird baths daily. Completely. From empty.  However, that is not too hard to believe when you watch the stream of traffic to and from the bowl.

One afternoon last week I was cutting the spirals back into the bay trees, when I noticed the arrival of a cloud of long-tailed tits. It is a bit like being in a blizzard when they drop in ever changing numbers from the surrounding shrubs, inspect the water and disappear again. This lot were possibly disappointed with the amount of water left by the blackbirds, but they still made use of it …

Long-tailed tits in the bird bath

And while I was watching the antics at the bird bath, my eye was caught by some further flashes of gold in the leylandii behind the small waterfall that we built to run into the pond this summer.

I waited to get a better view of the birds and was excited to see a pair of goldcrests. I have never seen these in the garden before. They seemed to be loosely associated with the tit tribe swirling around the patio at that time. They were clearly keen to bath in some running water:

Female goldcrest arriving at the top of the small waterfall

Male goldcrest bathing at the side of the rill

A short while later the male came back to try a bubble fountain bath. This was funny to watch because he kept starting at the top by the source of the bubbling water

only to rapidly ended up at the bottom of the slope, having been carried there by the water flow. I think that he looks quite despondent! 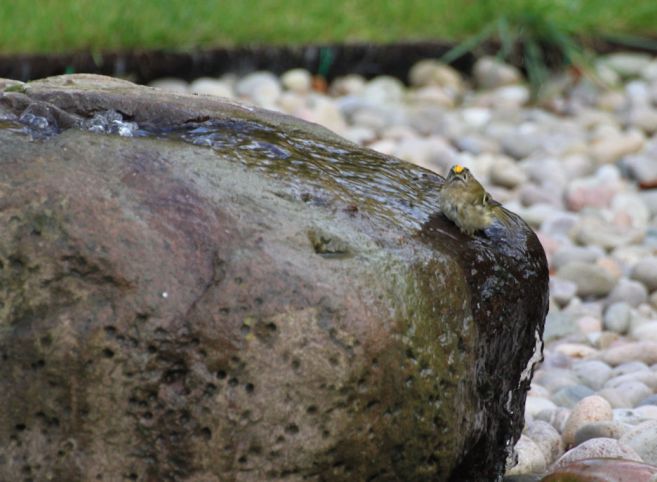 As a final wildlife entry for October, I present this chap: 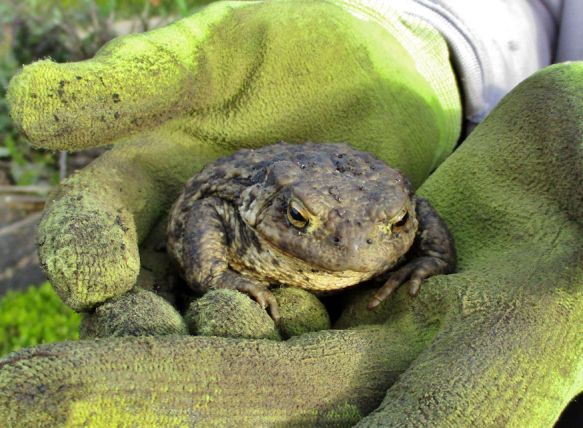 A toad in the hand is worth …

He is rather less attractive than those little birds, but is still remarkably cute for a toad. We accidentally dug him up while lifting and dividing a patch of Salvia nemorosa. He was moved to a safe place, but who knows where he has hunkered down now. I can’t help but worry about him not being so lucky next time.

I am linking up with Tina at My Gardener Says… for her monthly wildlife review. Tina is showcasing a beautiful set of butterfly photos. Do take a look and check the comments for links to other bloggers observations.