In a Vase on Monday – Paper Thin

Posted on December 5, 2016 by Frogend_dweller

The birch trunk is peeling, casting scroll-like bark sheets to the ground. So I’ve helped it a bit. I had the idea that rolling up the pieces of bark, as one might to make tissue flowers, would result in an interesting addition to today’s arrangement.

But I encountered an unanticipated problem. The bark is more springy than I expected, making it harder to roll, control and get to stay put. I’ve ended up tucking the ends in where I can. However, some strips are determined to unwind. Hopefully the birch sheets add texture and tie in with the bleached colours of the dried briza maxima and nectaroscordum siculum. 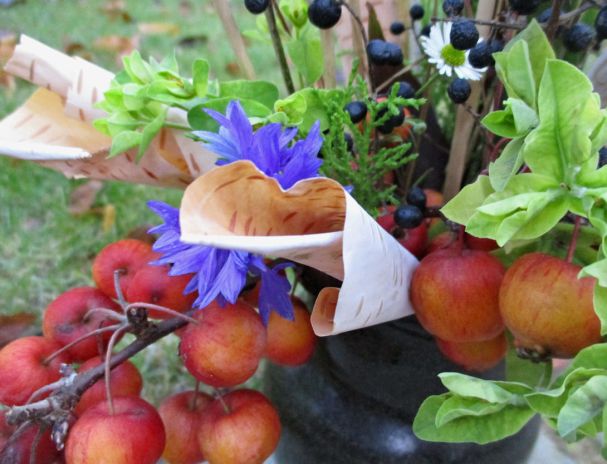 I love the way that the lenticel pattern on the bark echoes the markings on the crab apples (still going strong from a few weeks back) and that the inside is a deeper parchment colour.

There don’t seem to be many iris foetidissima seed pods about this year, but they look so lush inside that papery husk that I couldn’t resist adding one to the jug. The privet berries were shiny black a week ago, but are now drying out. I like the contrast that they make with the iris seeds.

There are no flowers left in the garden to speak of, but I’ve added a few specks of colour in the form of a protected cornflower from the vegetable patch, a tiny rudbeckia from the greenhouse and a few small erigeron daisies. Green foliage is provided by some twigs of lemon cypress and euphorbia oblongata. Their toned-down lime tints work well with the bark. 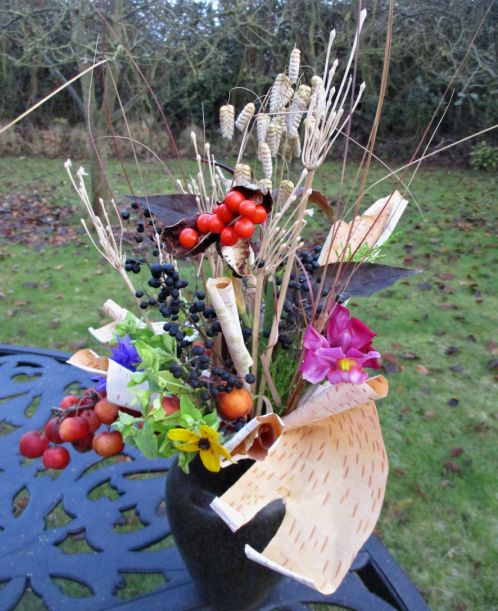 See that bark is unrolling as you look!!

I am adding my jug to Cathy’s (Rambling in the Garden) exceptionally popular In-a-Vase-on-Monday array. There are many imaginative and beautiful arrangements linked to her blog, so it is definitely worth taking some time to check out today’s vases and wreaths.

Have a good day.

Living in the damp middle of nowhere
View all posts by Frogend_dweller →
This entry was posted in Flowers, Winter and tagged berries and seeds, Birch bark, flower arrangements, Gardening, In a vase on Monday. Bookmark the permalink.

25 Responses to In a Vase on Monday – Paper Thin