Posted on December 7, 2016 by Frogend_dweller

With the frosty weather and exposure of the berried treasure in the hedge/tree branches the blackbirds seem to have multiplied. Berries are being stripped with frightening efficiency. Do they know it is going to be a hard winter?

At the end of the driveway we have a holly hedge. A week ago it was covered with sparking red orbs. Now it is bare, just glossy leaves remain. I see four or five blackbirds fly up each time I open the back door. They’ve moved en masse on to the crab apple tree this week. Happily it is loaded with fruit, but I hope some remain, so that my parents can watch their antics over the Christmas holiday.

Freezing temperatures have also limited the water resources for the birds and our two cascading fountains have become coveted assets. Not just amongst the blackbirds either. Thrushes are well represented too.

And for the first time we’ve seen fieldfares and redwings in the garden, making use of the water supply. There has been a bit of Fight Club action too.

There have been stand offs: 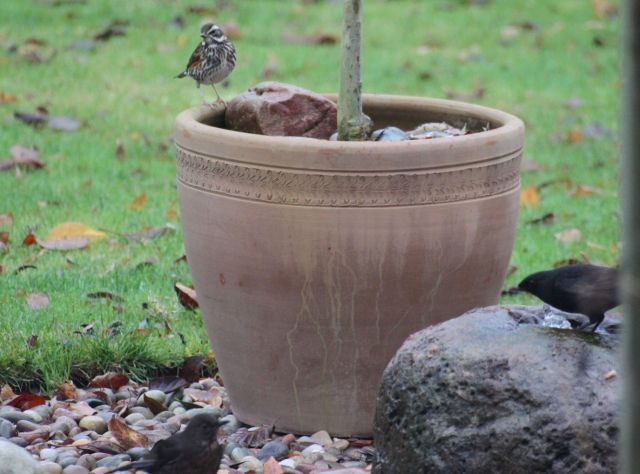 Bit of infighting on Team Black, watched by a redwing from Team Thrush

Fieldfare is the winner, taking on all-comers (including a great tit)

Of course, they all get a go … eventually. This goldfinch sensibly waited for things to get quiet again before appoaching for a drink:

The other bird whose numbers seem to have swollen in recent weeks are robins. 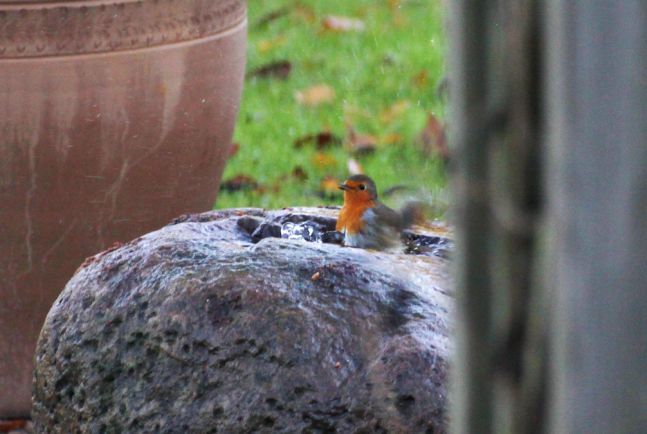 Either I am being tailed by them when I go on walks with the dog or they are spread in territories every few hundred metres. It is lovely though, because they are largely noticed by their song, warbled high in the tree tops.

We are seeing the same increase in robins at Wimpole too and I have a colleague who has taken to regularly bringing in a bag of mealy worms to feed them. They will come to within about a foot of us now. 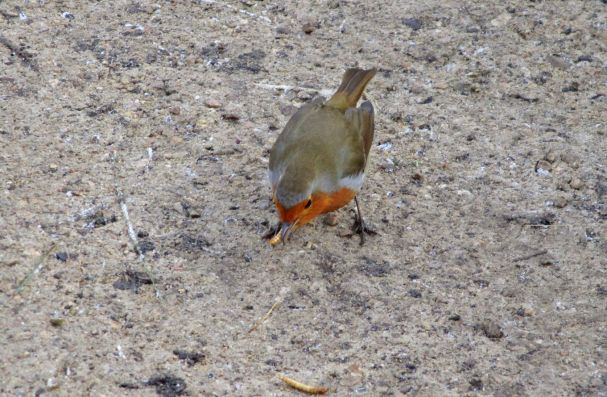 We are still seeing the little goldcrests around. In fact, although huge baubles are now decorating strategic trees in the pleasure grounds, the goldcrests don’t seem phased by them at all.

Here is a fun shot of a goldcrest gold catching an insect between two blue baubles (I was actually taking a photo of our reflection in the bauble when she arrived):

Goldcrest catching an air-borne insect in the decorated cedar

So this has turned out to be a post about birds. Bees and butterflies are tucked up for winter. However, I have two sightings of unusual mammals to share. Firstly, these cute deer have appeared down the Plant Hunter’s Walk at Wimpole in the last week. 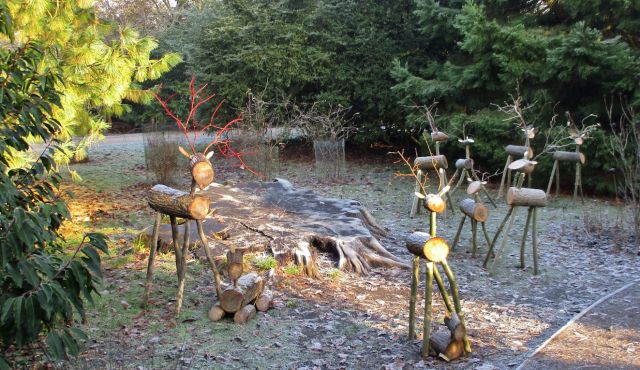 Rustic wooden deer at Wimpole. (There’s over one hundred to find. Guess what the gardeners have been doing over the last month!)

And finally, last weekend we visited the north Norfolk coast. We had a splendid walk along the beach at Holkham. I was talking to a guy raking the sand there (for lug worms?) when a seal appeared. He said that they are very curious about dogs and come in close to check them out. Fortunately Sadie didn’t even notice, otherwise she would have been in there swimming with it. 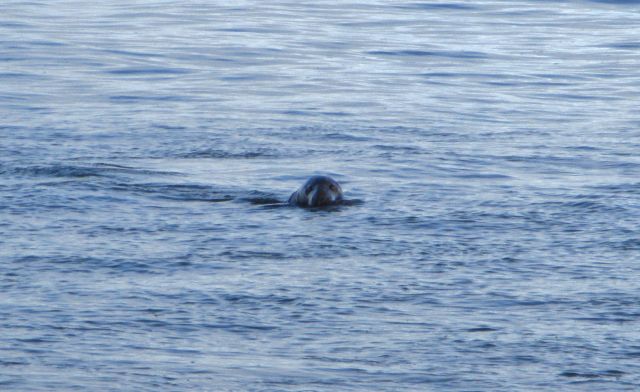 It is the first Wednesday of the month so I am joining Tina (of mygardenersays) to report on my local wildlife. Tina’s garden is still full of pollinators, so head there to see beautiful butterflies and metallic green bees …

Living in the damp middle of nowhere
View all posts by Frogend_dweller →
This entry was posted in Nature, Wildlife and tagged birdbaths, fieldfares, Gardening, Goldcrest, Photography, Redwings, Seals, water. Bookmark the permalink.