Caught in a mizzle – A walk on the north Norfolk coast

A couple of weeks back we jumped in the car and headed north on a spur of the moment decision to get a change of scene and do some coastal exploring. It was good timing, just before the Christmas rush and before our sons (and chaos) settle back at home.

We made it to the Norfolk coast at the harbour town of Wells-next-the-sea. Sadly, the harbour is now largely silted up and the North Sea is a mile further north. A stroll along a mile-long sea wall takes you to a beautiful sandy beach. As we began our walk it started to rain, a gentle, persistent fine mist that gradually blurred the view until, together with the failing light, we could see very little. 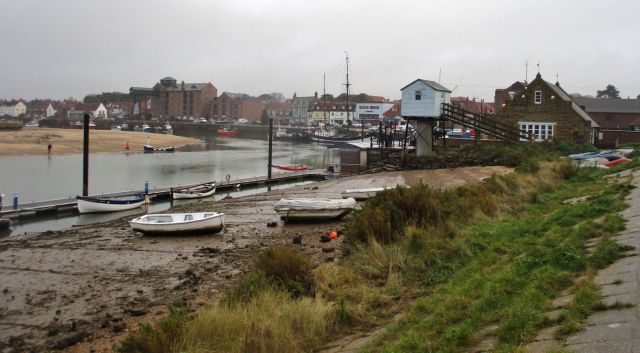 Wells-next-the-sea, with the tide out but a mizzle soaking everything

By the time we made it back to town to check into the hotel, we were soaked and could see some major disadvantages to sharing the room with a soggy dog!

Next morning the weather was thankfully a different story. We returned to the end of the sea wall and joined the beach a little west of the coast guard station, where dogs are allowed. 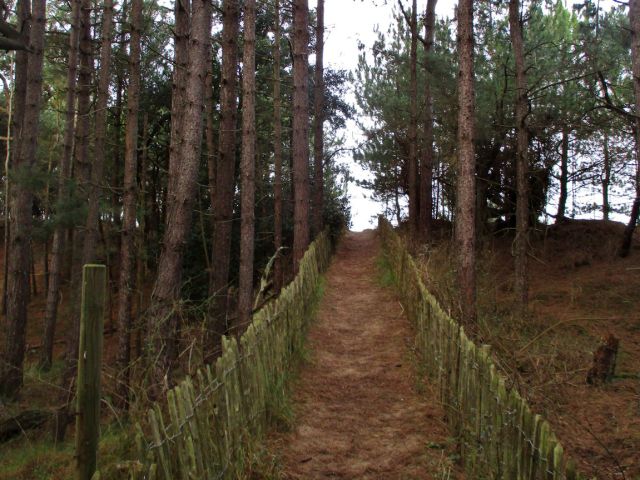 It is a climb up a protective sand bank through a narrow band of pine trees to reach the beach. It feels a little like entering a quarantine area. The trees deaden sound impressively and filter the light, creating a twilight zone. Breaking through on the beach side is a strangely liberating feeling. 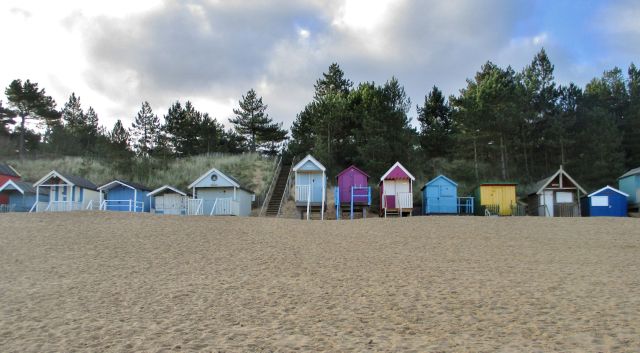 Beach huts along this stretch of coast can exchange hands for some serious money (one was on the market in 2012 at £70,000), but you can rent them for ~£30 a day. There are plenty to chose from …

Above the tide line the beach is covered in soft golden sand. 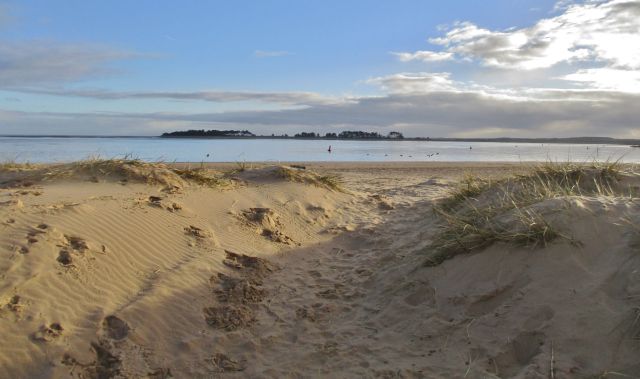 Close to the water’s edge there many shells, especially scallops, cockleshells and razorshells. We were striding out in boots, but those razorshells  must be a bit of a worry for people with small children. 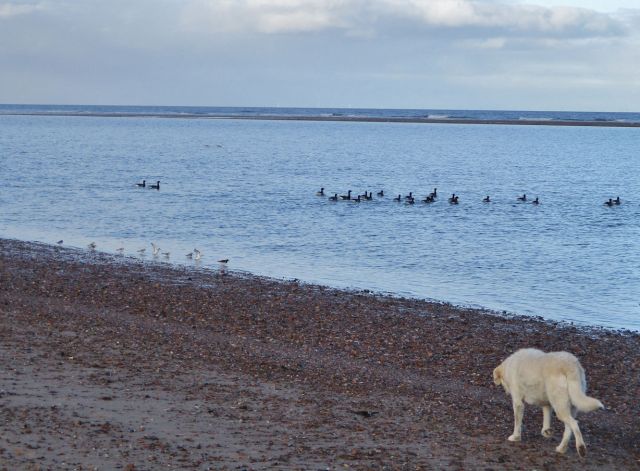 People come to this stretch of coast to spot diverse and rare birds. There are daily boat trips to Blakeney Point to see seals. Holkham is where I saw the seal that I mentioned in this month’s wildlife post. 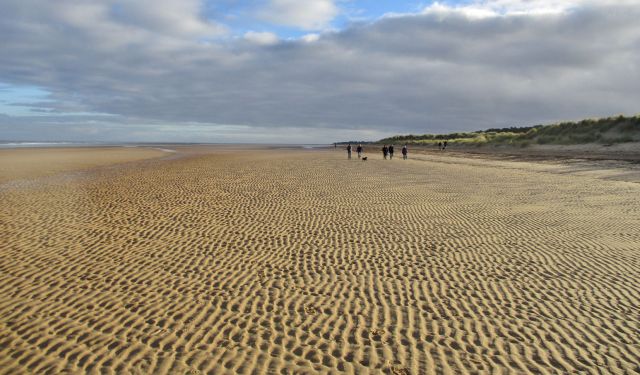 We turned back towards the pine forest behind the dunes at Holkham Gap, stepping through thickets of sea buckthorn (Hippophae rhamnoides).

The bushes were really glowing in the wintery light. 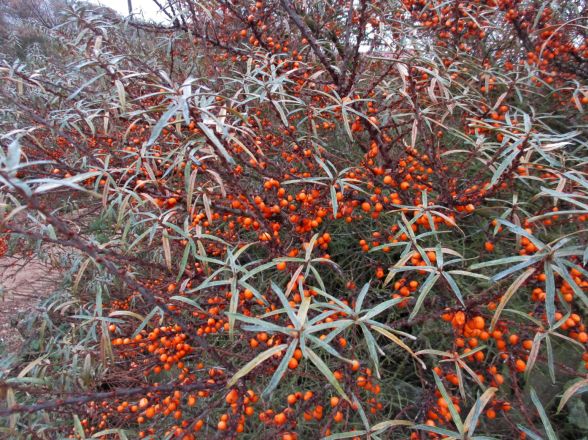 So we moved into the muted atmosphere caused by the pine needles, above and below. 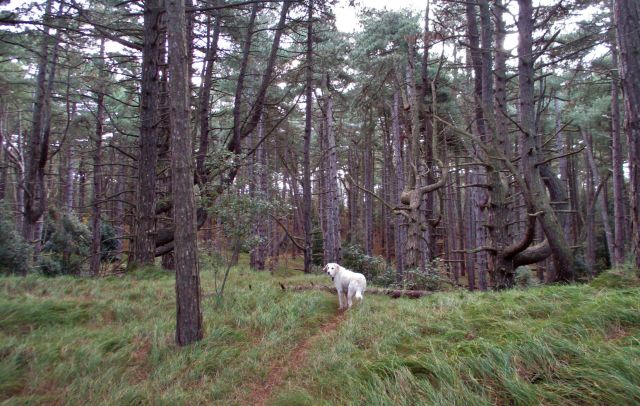 There are apparently three kinds of pines growing in the woods: Corsican, Scots and Maritime. I walked through them oblivious to this variety. The woods were planted in the  late 19th century. Most have grown straight and tall, but there are some fun shapes on the seaward edge of the woods. 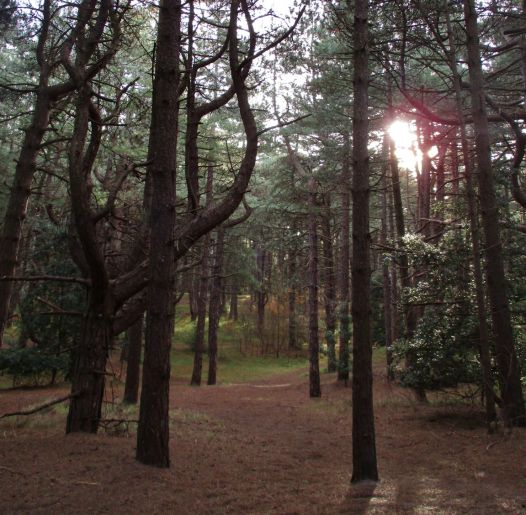 On the landward side of the band of conifers, the pines give way to deciduous trees and scrub. This diversification is a valuable aspect of Holkham Nature Reserve and provides nest sites and feeding areas for a much wider range of birds and insects than the pine ecosystem alone. 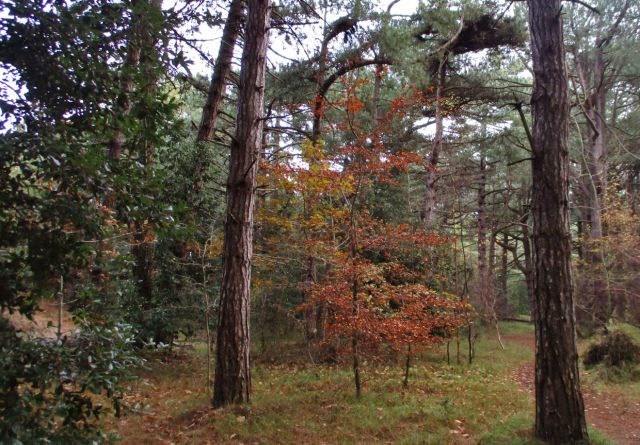 We walked back to Wells and the car through the silent woods. Sadly, we didn’t hear or see any Crossbills, which are supposed to be commonly found here.

This part of the coast is very dog-friendly. Sadie, our labradoodle, was able to accompany us in all of the restaurants, hotels, beaches and parks that we visited. It made our impromptu trip to Norfolk very easy and much more likely to happen again.

Living in the damp middle of nowhere
View all posts by Frogend_dweller →
This entry was posted in Nature, Out and about, Walks and tagged dog-friendly, Holkham, Norfolk, Pine trees, Seabirds, Seaside, Wells-next-the-sea. Bookmark the permalink.