Posted on January 4, 2017 by Frogend_dweller

At the beginning of December the crab apple tree beside the driveway was a magnificently laden affair. Whenever there was a touch of sunshine it became a glowing, amber symbol of abundance. And then the blackbirds moved in …

Female blackbird sizing up the harvest

Now, when I leave the house, I disturb at least 6 birds in the tree, sometimes as many as 10, gorging on soft, sweet apple pulp. Blackbirds are unashamedly messy eaters, as these photos show:

Mouth full … of apple. Not her best look! 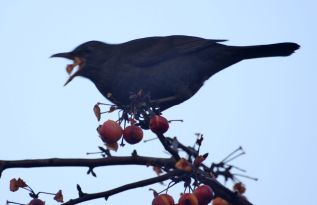 There is as much fruit on the ground as has been consumed and slowly but surely the branches are being laid bare. At this rate I expect that the apples will all be gone in the next few days. Then there will be more disappointed faces like this one! 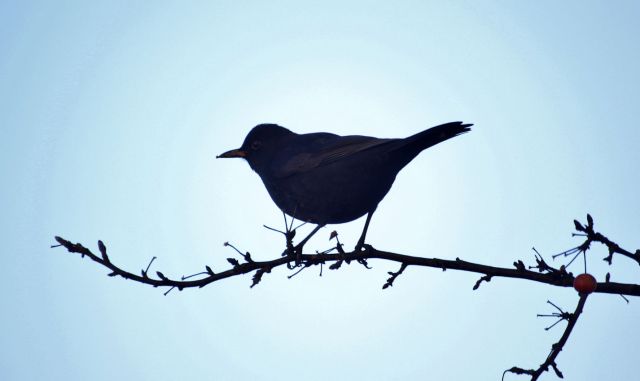 When she got there … The cupboard was bare

However, watching the tree being stripped clean is one of the great pleasures of the winter. Some years, there are more exotic migrants, like fieldfares and redwings, joining in with the feasting, but strangely not this year, even though we see them using the fountain.

This is my favourite blackbird shot from the apple frenzy: A bright eyed example, with glossy, plaid feathers and the shadow of yet more apples across its breast.

Sunlight makes such a dramatic difference to the colours and patterns on their plumage. For instance, this is a greenfinch waiting in the wisteria for a go on the peanut feeder. Many of the photos I’ve taken over the last week or two look like this: some nice bokeh, but dull colours.

Greenfinch on a dull day

But look at him in the sunshine! Isn’t he glorious 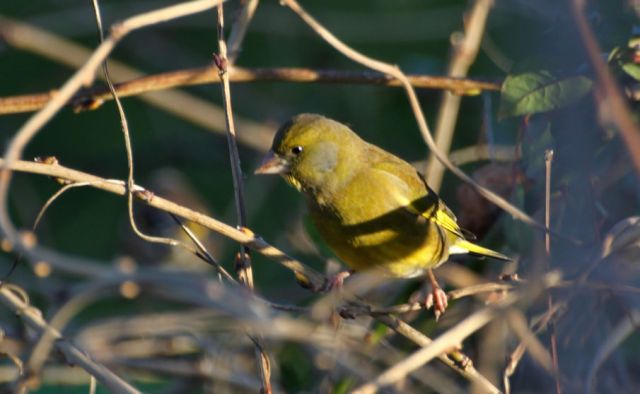 Our feeders have been out for about a month now and they have rapidly been incorporated into the sunflower trawl that the finches carry out daily. Only three or four birds can use a feeder at one time, but the local goldfinch charm is a constantly changing, swirling cloud with individuals making a dive for gaps as the opportunities arise. 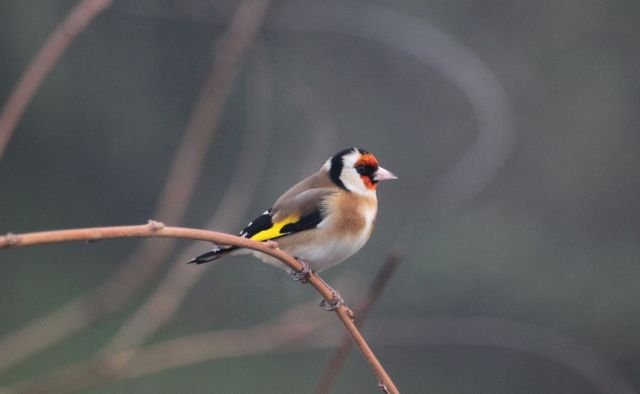 Goldfinch on the wisteria

The other large tribe of birds arriving in the garden for the feeders, both morning and afternoon, are the tits. I never fail to be entertained by the acrobatics of the long-tailed tits in particular. Here is one showing how dextrous it can be with its legs. It looks rather like he is acting in Hamlet!

Long-tailed tit … holding on with one leg whilst eating a peanut crumb from the other!

And this one is shaking his tail feathers: 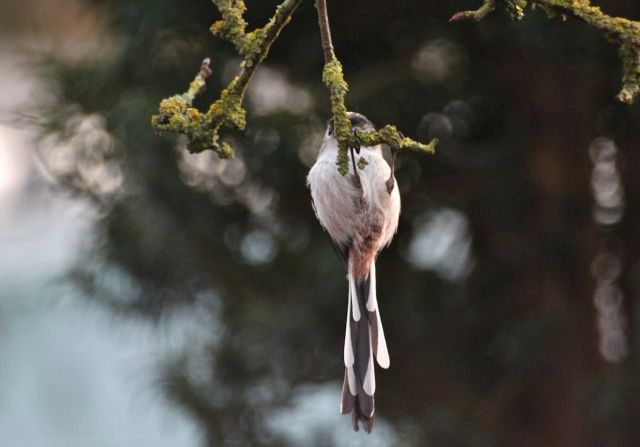 The last of the line of feeders across the  front of the pergola contains peanuts and is open to squirrel attack. (The rest are double layered to prevent that as much as possible.)

Black squirrel making for the hills

However, the last one is deliberately hung for the larger birds. A pair of jays have adopted it, using it constantly in tandem while it dispenses nuts. The problem is that they have hacked a hole into it at the bottom and they now retrieve whole nuts in quick succession, so it is depleted in the blink of an eye.

Beneath the nuts there is a whole different community, of cleaners: collared doves, chaffinches and dunnocks …

And as of last week there is also a little mouse darting out to gather scraps. I am no good at mouse IDs unfortunately, but his white tummy makes him a field or wood mouse rather than a house mouse. Let’s hope he stays outside too. 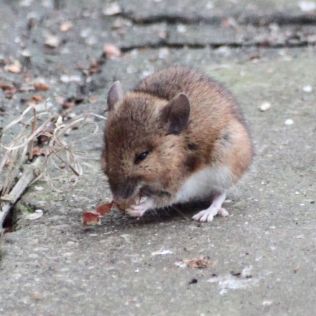 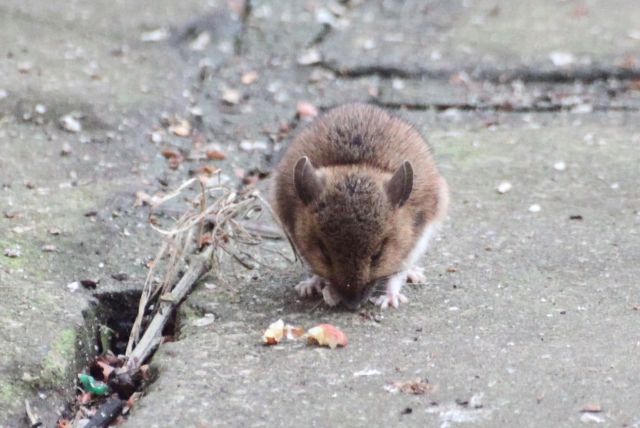 I thought I would end this post with our first sighting of the little owl at Wimpole since spring. He was enjoying basking in the sunshine on his oak tree on Monday when we went for our traditional New Year’s Day walk (OK, it rained on Sunday). I ran back to take better photos, but he was gone. 😦 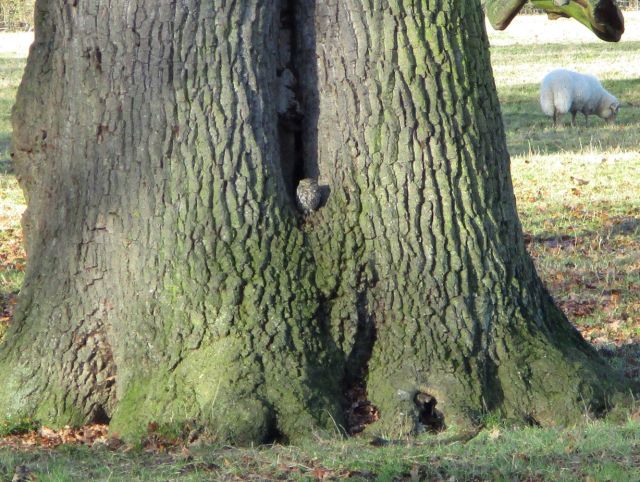 Little Owl – soaking up the rays

I am once again linking up with Tina @mygardenersays for Wildlife Wednesday and if you’ve never seen a Cooper’s hawk or Mockingbird you should definitely clink on the link to see her beautiful photos of them.

Living in the damp middle of nowhere
View all posts by Frogend_dweller →
This entry was posted in birds, Nature, Wildlife and tagged Bird feeders, birds, Gardening, mouse, Photography, squirrel. Bookmark the permalink.