Confessions of a coffee drinker

We are a coffee loving family, although some of us are more fussy about the taste than others. Our coffee machines have gone through any number of incarnations and are in fairly continuous use. I particularly liked the version that used the equivalent of teabags, especially since they were completely compostable. No mess, no waste. I hung on to that machine as long as possible. However, when it broke down for the nth time and the choice of flavours was reduced to only one kind, it became clear that the next purchase would most likely use coffee pods. Reluctantly I welcomed the new machine into our home. It makes good coffee, but I resent buying the sealed plastic pods that feed it. So I recycle as much as possible, collecting the used pods and then laboriously cutting them open to tip out the coffee grounds. The grounds are then emptied into the compost heap. 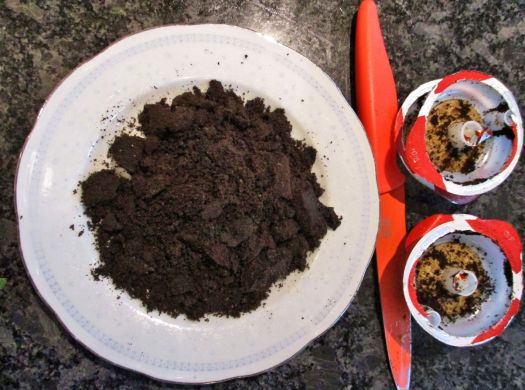 Extraction of coffee grounds from the capsules

A few years ago, when I commuted daily into Cambridge, I use to regularly pick up a bag of used coffee grounds from Starbucks. They ran a scheme called Grounds for Your Garden (started in 1995) which I made good use of. Their website still mentions the project, but makes it clear that availability is store dependent. More recently (2015) Costa Coffee seem to be running a similar ‘Grounds for Grounds’ deal. I wonder how many people know about or use these schemes? They seem like such a good idea.

There are a number of claims about how fantastic the grounds are as a soil improver. Used grounds are pH neutral. They release nitrogen, calcium, magnesium slowly and add organic matter, improving soil structure.

In terms of composting, coffee grounds have a C:N (Carbon/Nitrogen) ratio of 20:1. This is the same ratio as general food waste and close to the ideal ratio of ~25:1 for the quick production of a good, sweet-smelling compost.

There are (unsubstantiated) claims that coffee grounds are a slug repellent, but I would say that a barrier of coffee grounds was completely ineffective after last year’s sunflower protection experiments! 😦

There is also some evidence that coffee grounds applied directly to soil may actually lead to reduced growth in plants.

However, I will continue to add our grounds to the compost heap and some areas of heavy clay in the garden.

As evidence for the effectiveness of using coffee grounds in a garden, my mother-in-law has a lush-looking backyard at her home in Deal, which she attributes almost exclusively to her use of tea and coffee grounds. She had been struggling to grow anything in the garden until she started emptying her cafetiere and teapots outside.

Growing a jungle on coffee

On a related, but different use for coffee grounds, my son was given a mushroom growing kit for Christmas, which is based on a block of composted expresso grounds.

We opened the box and started the growing process on 3rd January.

After a few days of staring at these funny little pink blobs on the surface of the block, some exotic pink mushrooms (oyster I think) actually started to grow: 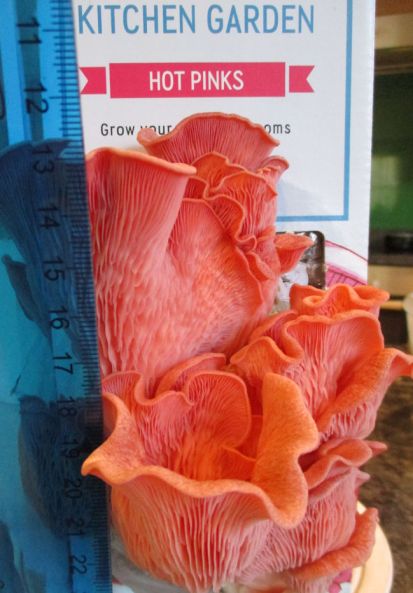 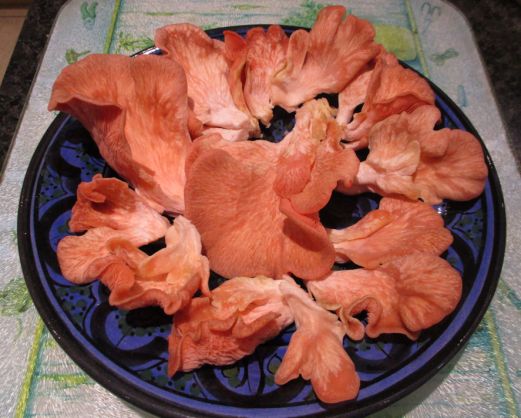 The exotic ‘Hot Pink’ mushrooms were delicious and apparently, if we rest the box for 10 days, we can start the whole process again. It seems like magic!

Living in the damp middle of nowhere
View all posts by Frogend_dweller →
This entry was posted in Drinks, Food, Nature and tagged Coffee, Coffee grounds, composting, Gardening, Grow-your-own, mushrooms. Bookmark the permalink.

11 Responses to Confessions of a coffee drinker