Structural Integrity – It’s there in black and white

I like to leave seed heads on the plants in the borders as long as I can, partly for the wildlife and partly because I find the bare bones fascinating.

Since it turned cold and windy though, we’ve had to tidy up the borders a bit more, because stalks were beginning to collapse and some of the dried flowers have gone from interesting to darn right messy or even horizontal (e.g. some of those wonderful verbascum towers). Even though most of the stuff I’ve been cutting down has been bound for the weed bund, I’ve been retrieving any strong and interesting material for indoor arrangements. And there has been a surprising amount of it.

So I thought that it would be worth reviewing what has made it to the end of January and since I’ve been enjoying the structural forms it seemed to make sense to take the photos in black and white.  (Though undoubtedly the flow of muted colours adds considerably to the full border display).

Monarda is still going strong, no loss of structural integrity at all, so I am starting with it’s Alice in Wonderland-like stacked pincushions:

Other plants still standing tall are: Ammi visnaga (interestingly much stronger stems than A. major), Teasel, Miscanthus sinensis and hollyhock. 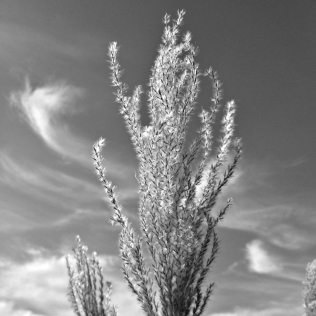 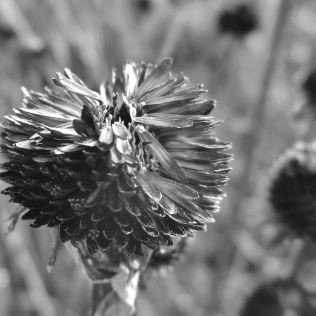 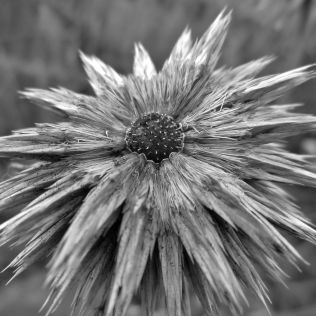 Followed by a few that are light-weight and fallen or just about hanging on: Nigella damascena, tomatillo (on the ground skeletonising in drifts), Asphodeline lutea (just beginning to erode) and Eryngium 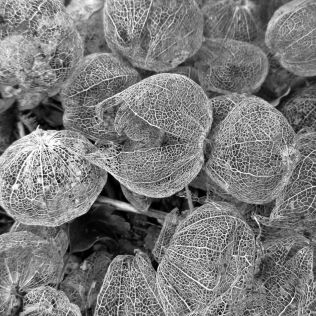 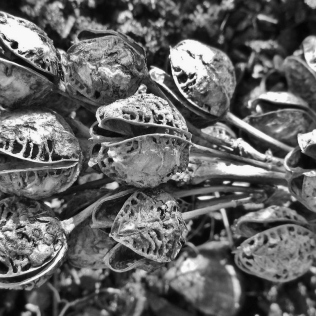 And finally, a couple better picked earlier: Allium christophii with seeds (but there are still a few standing in the borders in protected areas) and Bells of Ireland (Molucella laevis) which has lost quite a few bells and spikes to the weather.

Bells of Ireland and the maw of a blackhole

So those are the things I’ve recently collected from the borders, but there are other seedheads I’ve kept, like poppies, grasses, honesty, artichoke and safflower. Those last few are tending towards dried flowers … which is a completely different game and one that I hope to explore this coming year.

Living in the damp middle of nowhere
View all posts by Frogend_dweller →
This entry was posted in Flowers, Wimpole Hall, Winter and tagged Black and white, Gardening, Horticulture, perennials, Photography, seedheads, Structure, Tidying the borders. Bookmark the permalink.