A landscape of chthonic power

So what would you do with a couple of tons of unwanted soil, dirt and rubble from a variety of gardening projects? Well, at home we created a small hill in the corner of the garden, which was initially used as a hill fort (when the kids were young), but now has become a favourite spot to sit soaking up the last rays of the sun under the sheltering embrace of a walnut tree. However, at Wimpole Hall they decided to use their spoil to add a bit of atmosphere to the new meandering path through the Pleasure Grounds.

The Explorer Walk leads through a recent, but extensive, oak stumpery

This ‘Explorer Walk’ winds its way from the garden entrance down to the farm, through a constantly evolving collection of items of interest; a large (but broken) stone crest, a willow tunnel, a group of giant carpenter bee stacks, a wonderful stumpery, a bird feeding station and an incipient tree cathedral.

Giant carpenter bee stacks in the foreground, stumpery in the background

The spoil was loaded on to a tractor, lugged over to a dull spot amongst the laurels and used to make a high bank, set at an angle to the walk. Then those lucky gardeners got to play with some wonderful old oak deadwood, collected from the Estate woodlands, to create a new feature, but with an echo of the main Stumpery (below).

Part of the main stumpery

They have integrated the bank topography with the deadwood to evoke a ‘landscape resonant with chthonic* power’ (to quote gardener Chris Evans). 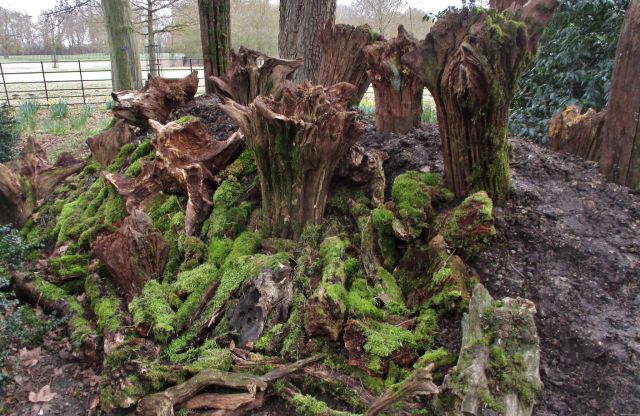 In this new vision the stumps emerge from a moss-strewn earth bank, climbing the slope, so that the tallest trunks are silhouetted against the skyline as you look southwards from the path. 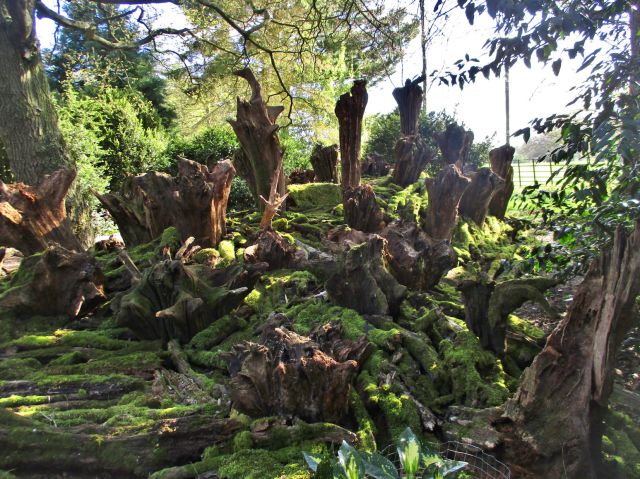 I give a thumbs up to this new project … Not bad for a load of old dirt and dead trees!

*chthonic meaning – “in, under, or beneath the earth”. The translation of meaning discusses deities or spirits of the underworld, especially in Greek religion.

Living in the damp middle of nowhere
View all posts by Frogend_dweller →
This entry was posted in Trees, Wimpole Hall and tagged Gardens, Moss, Oak stumps, Photography, Stumpery, Wimpole Estate. Bookmark the permalink.

14 Responses to A landscape of chthonic power