There is plenty of stuff going on in the garden and countryside around here, but with the explosion of new green leaf cover and birds sitting on nests etc. I don’t have that much to actually show. For instance, today I heard a cuckoo. It has been calling each day this week as I walk the dog. I tried to record the sound on my phone, but on playback heard only the wind. I have never actually seen one, but they are a bit like a cross between a pigeon and kestrel. They are a summer visitor to the UK and (I didn’t know this before writing) a Red List species due to a recent trend to population decrease.

I also hear owls at night, but have not spotted one out and about in daylight for some time. Furthermore, I’ve been told that there are water voles and otters on the stretch of river (Rhee) that I walk each day, but I’d have to go at dusk, without the dog, to see the former and at roughly 2am to see the latter. A friend has managed some video footage of the otter, but the difficulties of remote observing are obvious (not to mention that a badger lobbed the camera in the river later on).

So what have I seen? Well, here is a muntjac deer that we regularly encounter on our walks. Since I never know when we will see it, this is unfortunately a poor quality phone picture. I have various shots of its white tail too!

Orange-tip butterflies (Anthocharis cardamines) are on the wing in good numbers. 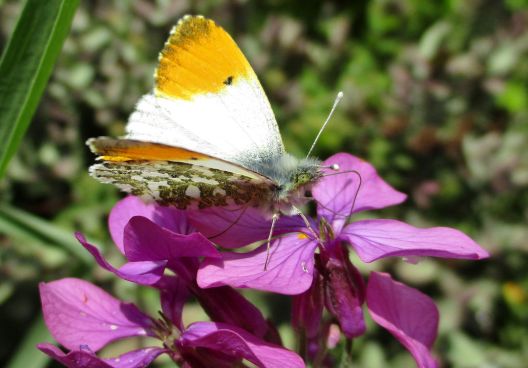 Only the male has the tell-tale orange wing tips, but both sexes have the delicately mottled undersides.

The beginning of April saw the swallows arrive. I spotted my first on 10th April, that’s four days earlier than last year. 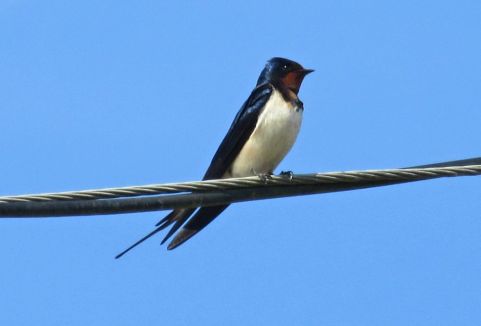 Swallows are back in the UK

They’ve been flying very close to the ground, so I guess that the insects aren’t thickening the air high up yet. It’s been very dry in East Anglia and soil moisture is still very low. 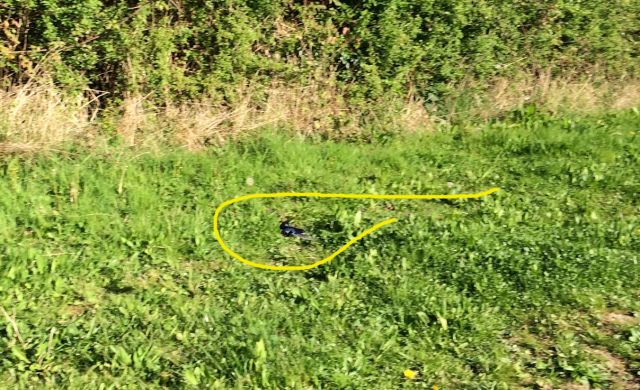 One insect I’ve spotted earlier than normal this year is the St Mark’s fly. They are named after St. Marks Day (25th April), which is when they appear with surprising regularity. This photo (below) was taken 14th April. There were several just sitting on the lettuces. For a short period in May the flies tend to swarm by the hedgerows, hanging around in the air with their distinctive long hind legs daggling. This can be annoying hazard on walks, but they are useful pollinators.

With no puddles around and rivers running low, providing water in our gardens for the birds, insects and animals is especially important. Our bird bath remains the best place to see who is visiting at this time of year. This robin certainly enjoyed his wash the other day.

In fact, I think that we have a robin nesting in the conical buxus by the pond. I’ve not seen any evidence of babies yet, but I am keeping my fingers crossed.

We were away for a bit of the month and one of the highlights of that trip were the lizards that we saw everywhere, mostly hiding in the lava walls that delineate the island of La Palma. So I thought that I would share a photo of a blue throated lizard (locally Lagarto tizon, Gallotia galloti) that we enticed to just about stay still for some bread. They are apparently fond of bananas too. This example was about 30cm long and they can reach ~40cm.

And to finish the post I just wanted to say that, although she doesn’t count strictly as wildlife, I would be happy to hire out our labradoodle, Sadie, for cleavers/goosegrass (Gallium aparine) weed clearance jobs. She is inordinately fond of eating the tips of this annoying weed and usually pulls the whole plant out!!!

Sadie and the cleavers

Wildlife Wednesday is a meme hosted by Tina at mygardenersays. Click through to be rewarded with some great photographs of birds, including a lovely series of Summer Tanagers.

21 Responses to Wildlife Wednesday – A sense of hidden things