In a Vase on Monday – Spiked 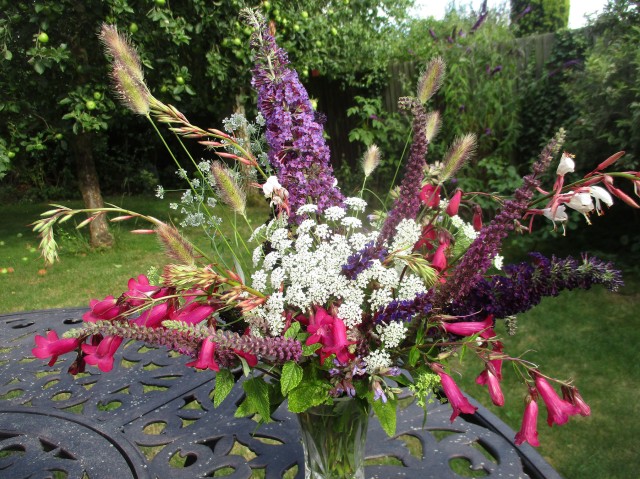 Today saw the start of the lengthy Box hedge-trimming operation in the Walled Garden at Wimpole and I was warned that, unless I wanted truncated and squared off border plants, I had to do something about the overhanging flowers in my borders. So I’ve temporarily propped back the exuberant desirables like stipa tenuissima, pennisetum villosa and agapantus, but pruned back the gaura, ammi, sage and salvia nemerosa. Looking down at the bunched stems of gaura in my hand I couldn’t bear to compost them, so I decided to bring some home to form the basis of a Monday vase. That means that I’m joining in with Cathy’s (at Rambling in the Garden) ever expanding ‘In a Vase on Monday’ meme using logical hedge trimmings (mostly)!

It’s not all rescued trimmings though. I’ve added further purple spikes to the salvia prunings using buddleia and teucrium hircanicum from the garden at home.

I’ve also had to tidy a lovely grass, pennisetum thunbergii, at our front door (so that the postie can get through to the letterbox) and those stems have added some punch to the arrangement.  I think that the pennisetum’s dusky pink tones exaggerate the carmine in the gaura and the tiny red eye in the buddleia flowers.

I’ve picked some Penstemon ‘Garnet’ to echo the red in the gaura too. Meanwhile, the ammi major provides a nice central cloud from which all the spikes emerge.

Don’t forget to click across to Cathy’s post to see what everyone else has gathered for their vases today.

Living in the damp middle of nowhere
View all posts by Frogend_dweller →
This entry was posted in Flowers and tagged Gardening, Gaura, hedge trimming, In a vase on Monday, Pennisetum thunbergii, Photography, teucrium hircanicum. Bookmark the permalink.

16 Responses to In a Vase on Monday – Spiked