A dreadful title I know, but once there were three words beginning with the letter ‘m’, I just couldn’t stop myself. In fact I’ve made jelly, not marmalade, from some medlars that I gathered last month. The reason that I have even attempted to do anything with the fruit was due to an enthusiastic visitor to Wimpole who, while admiring this years crop, was singing the praises of the preserve. Last time I tried a medlar I didn’t enjoy it, may be it was beyond its best, because I do remember that the very first time I had a bletted medlar (soften beyond ripeness) I thought that it was reassuringly like baby food. 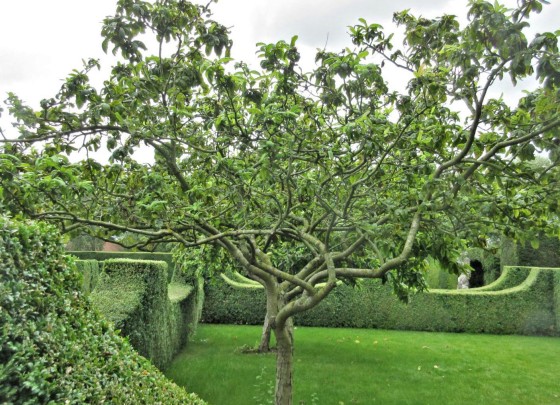 Of course I don’t remember that from my own childhood, but I do recall sampling the jars of pureed fruit or mushed up vegetables that I tried to feed my kids. Some of them were disgusting and were immediately relegated to the bin. However, the ones that I liked were the fruit custards and, of those, the best was apple puree. Medlars taste like that: a slightly gritty, apple flavour, but mellow, as though the apple has been cooked and mixed with a bit of cream.

Medlars (Mespilus germanica) are a very old fashioned fruit. Certainly, by medieval times they were well known in Britain and alluded to in literature of that period, albeit using crude names. In spite of their germanic latin name, the trees are indigenous to countries surrounding the Black Sea, particularly Bulgaria and Turkey. Since the Victorian era medlars have fallen out of favour here, possibly because the whole bletting process skirts the edge of rotting and we’ve become rather squeamish about such things. However, according to an Independent newspaper article this year, they could be about to make a comeback. 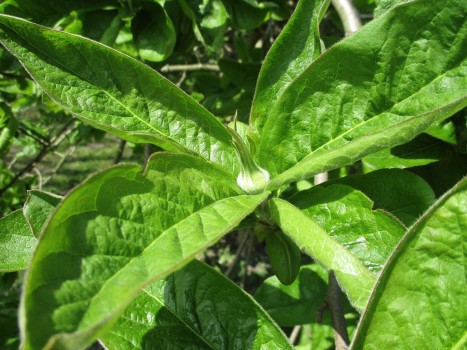 They make a rather interesting small garden tree and are self-fertile so you only need the one. Growing to ~5m on Quince A rootstock, they can easily be pruned to keep them to ~2-3m and though they tend to have drooping branches, they can be shaped into twisting standards as shown by the lovely topiarised forms at Grimsthorpe Castle, Lincolnshire. 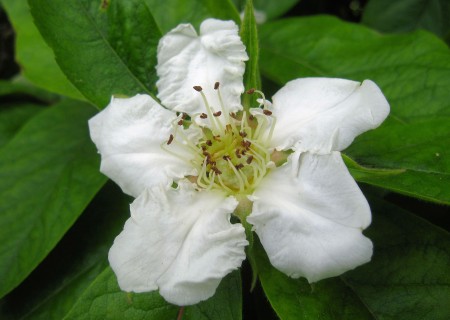 Medlar flower: The petals have ruffled edges and are spread like stars.

The trees are practically trouble free. They flower in late spring and are unfussy about soil. They will even growing reasonably in partial shade. As the fruits develop they start to exhibit their characteristic anatomical shape. They grow until they reach the same sort of size as tomatoes, palm of your hand size. 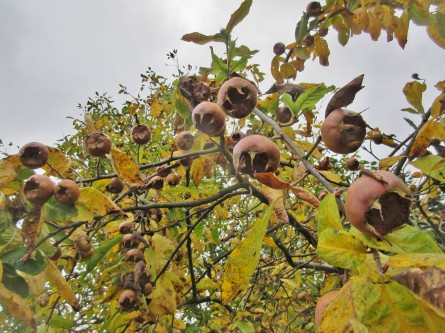 The autumn colour of medlar trees is another plus

Cropping occurs much later than apples or pears. You can either let the fruit soften naturally on the tree, waiting for mild frosts to do the work, or it is probably safer to pick the fruit in late October/early November, whilst they are still hard and let the medlars blet in storage. This takes about 3 weeks.

One of the medlar trees to be found on the Wimpole Estate, Cambridgeshire

So, how is the jelly made from this soft brown flesh? Well, luckily there is nothing complicated about it. To make sure the jelly sets, it is suggested that about a fifth of the fruit used are hard/unbletted. These will have plenty of pectin. I’ve given the recipe that I used below.

Hopefully, the jelly will be delicious with Christmas dinner. It is much the same colour as quince jelly, perhaps a little more golden. Maybe I should try it with cheese and biscuits to test it first!

Bletted medlar sitting on top of a jar of medlar jelly

So strangely, if you are interested in growing medlars, there are plenty of suppliers around* (not so out of favour then!) and there are a few cultivars to choose between. The most common cultivar is ‘Nottingham’, which is noted to have a pleasant taste. ‘Royal’ has larger fruit and can purportedly be eaten before bletting. ‘Large Russian’ has good flavoured and even larger fruit.

Ingredients – scale up or down as required

Chop the fruit in half, placing the pieces in a pan, covering with the water. Add the lemons, cut into large chunky pieces. Use a lid to partially cover the top, in order to retain as much liquid as possible, and gently simmer for about an hour. Don’t mash the fruit up too much in the pan, otherwise the jelly will end up cloudy.

Strain the juice using muslin or a jelly bag. Once the liquid is measured, return it to the pan with a matched amount of granulated sugar (I do this in old units 1 pint : 1 lb, which is 600ml:450g). Boil the syrup until it reaches setting point, i.e. until the surface of a cooled test drop wrinkles when touched.

Remove from heat and pour carefully into sterilized jam jars or kilner jars.

*Here are some current suppliers of medlar trees in the UK