Posted on January 3, 2018 by Frogend_dweller

I know that at this time of year I spend a lot of ‘indoors’ time peering out: at the garden, the moon, the weather and the wildlife, but recently I feel like nature is turning the tables. I am being watched. The wood pigeon is definitely giving me the eye whenever he sits on the archway to the patio: 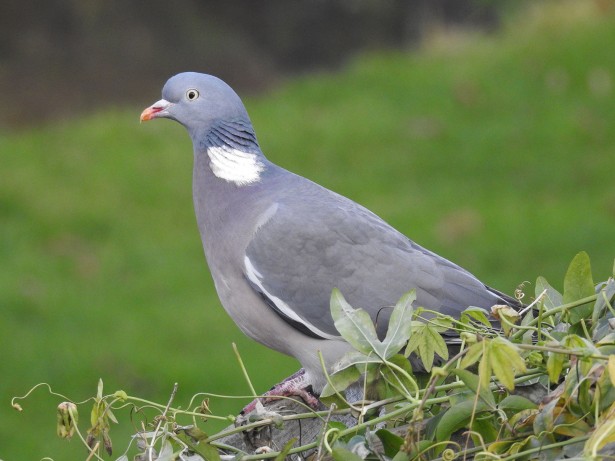 There seems to be something distinctly odd about his eye and I think that it is because the pupil is egg-shaped, not round. 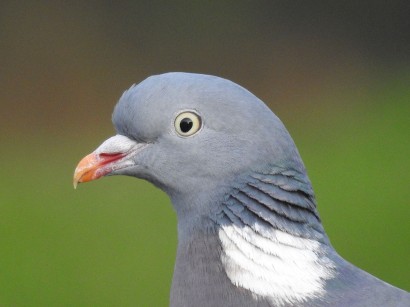 Up in the ash trees by the alley, the brotherhood of the Rooks is looking pretty sinister and is definitely watching the proceedings at ground level. They are also probably eyeing up nesting spots too. In fact, these trees hosted several nests a couple of years ago, until the new residents of the house had the trees lopped and topped. The branches now have plenty of new growth and the rooks are back. Let’s hope they don’t harbour any resentment!

On our driveway the birds waiting for a chance at the crab apple tree are ever alert for movement, but they have become quite complacent about my comings and goings, so long as they are facing me. I am still observed very closely, but they don’t shift or fly away as much.

Fieldfare watching from the birch on the driveway

December’s weather has been exceedingly changeable, with snow, ice, rain and sunshine. Temperatures have changed by almost 20 degrees day to day, swinging between -6 and 13 degrees Centrigrade here in Cambs. The penultimate day of 2017 was very mild and I was out doing a spot of late bulb planting (don’t judge!) when I heard a loud, deep buzzing. I tracked the sound back to this rather magnificent, pollen-laden buff-tailed bumblebee on some winter honeysuckle.

Happily, she has obviously found a good few flowers around. Buff-tailed bumblebees (Bombus terrestris) are often the earliest to be seen in the year. Did you also know that Bombus terrestris is one of the main species used in greenhouse pollination, so it is a species found around the globe, even where it is non-native?

I was tidying up soggy fallen leaves the week before Christmas when I found this curled, ginger-haired caterpillar in the pile. I don’t know what kind of moth it would turn into (possibly a Buff Ermine – but that is a guess) and I am not sure what it’s chances of survival are now that I have disturbed it.   😦 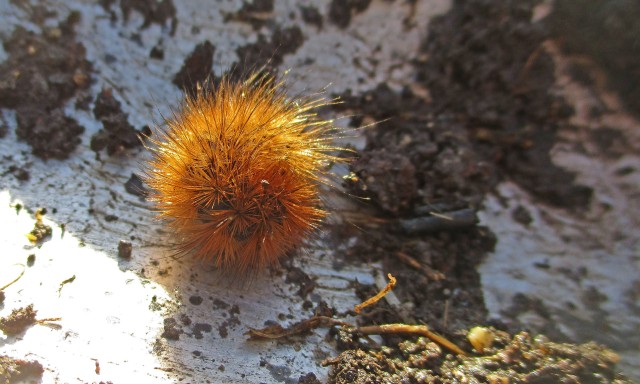 The fight for the crab apple crop continues, but a pair of mistle thrushes are dominating its branches. 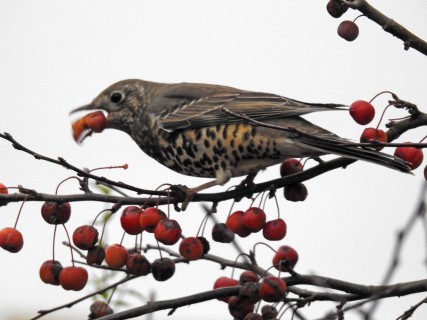 I’ve watched them chase off all kinds of competitors, even meak and small birds like chaffinches and blue tits.

Squirrels are becoming more of a nuisance on the feeders, because their numbers are growing. This fat grey is responsible for chewing through all my solar lights around the pergola.

‘OK, I may have put on a bit of weight over Christmas, but this is my best side‘

But he now has competition from a pair of black squirrels. The three of them regularly crawl all over the wisteria, birch and pergola looking for opportunities. This last month we’ve been forced to change the final peanut feeder to a squirrel-proof version, due to the number of times they have thrown it on the ground and damaged it … beyond repair now. 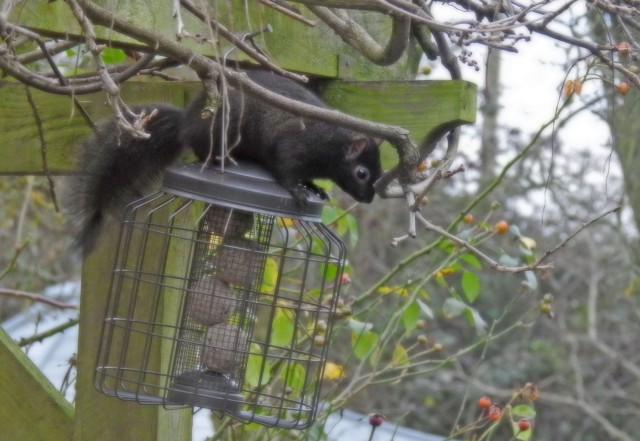 ‘Zut alors, this lid seems to be heavy and twisted on firmly!‘

Even so they still seem to systematically try each feeder every day looking for weaknesses. Today I watched the grey one attempt to pull off the new feeder’s lid several times.

‘Maybe I can approach those delicious fat balls from this angle?’

Although the squirrels scare off the birds when they are checking around the feeders, the regulars are back on the nuts in no time. Here’s a selection longtailed tits, blue tits, great tits and a chaffinch shortly after a squirrel patrol:

Birds seem to spend long intervals eating at the peanut feeders, but they only visit the sunflower feeders to grab a seed and then fly off to eat it on the wisteria. The sunflower seed levels drop very quickly as a result.

I was interested to see a dunnock (below) up on the sunflower dispenser, because they are usually ground dwellers, eating the dropped pieces. I’ve never seen one brave the cage before. He seems to be crowing about it too! 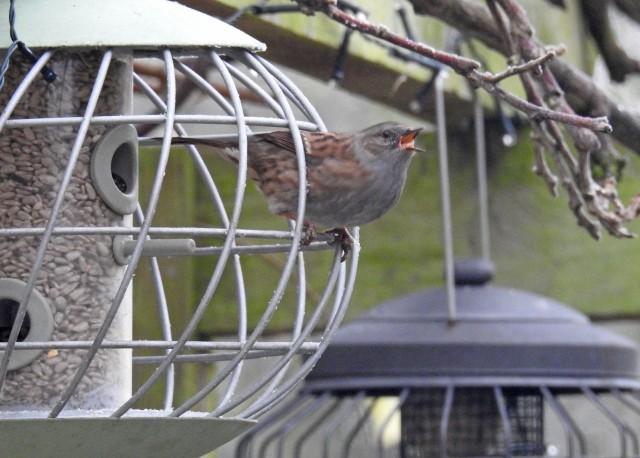 Dunnock on the sunflower feeder

Goldfinches aren’t as plentiful now as in the autumn, but they continue to visit the garden. Especially when the sunflower feeders are full. They are a favourite of mine. (Shame all these birds look like convicts as a result of us squirrel proofing the nuts).

I’ll finish with a shot of our resident robin. 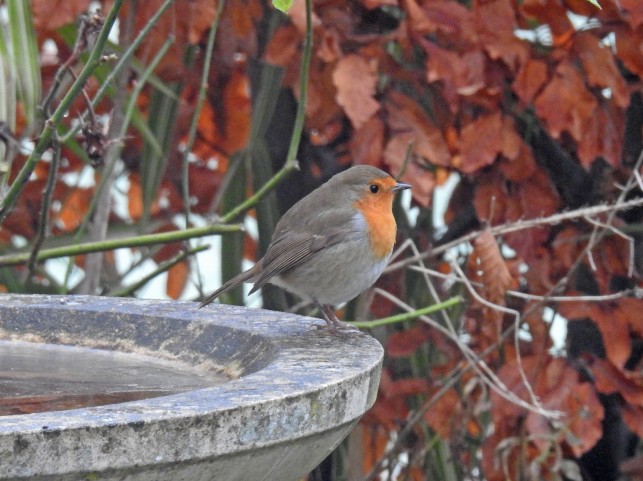 After all, it wouldn’t be December without a robin!

This is my contribution to Wildlife Wednesday, a monthly meme hosted by Tina at mygardenersays. There is a good selection of possums to see this month if you head over to her blog.

Living in the damp middle of nowhere
View all posts by Frogend_dweller →
This entry was posted in birds, Nature, Wildlife and tagged Bumblebees, caterpillars, Gardening, nature, Photography, Squirrels, Thrushes, Wildlife. Bookmark the permalink.