September Wildlife Sightings – On the cusp

Posted on October 4, 2018 by Frogend_dweller

You know that autumn is here when the spaces between everything in the garden are filled with large webs and, more disturbingly, large spiders. There are loads of garden cross spiders stretched across our front garden path waiting pendulously to trap unwary dog-walkers first thing in the morning.

They (the spiders) seem to be doing rather well for themselves, since most of the webs are decorated with all sorts of wrapped insects and the spiders are looking pretty massive. There are plenty insects about, plus a few other things, so I am joining Tina @mygardenersays for her monthly meme celebrating wildlife in our gardens. Apologies for the late post though.

The weather, of course, has been all over the show. We’ve had two frosts (enough to scorch dahlias, zinnias and tithonias), wind, lots of blue skies and a little rain. Not enough rain. I am still occasionally having to water the borders even now in October (the asters have never looked so droopy!) and as a consequence I am also still upsetting any frogs that are hidden in the foliage. I’ve never understood why they don’t relish a fine spray of the wet stuff, but they invariably hop out of the way in an ungrateful manner. 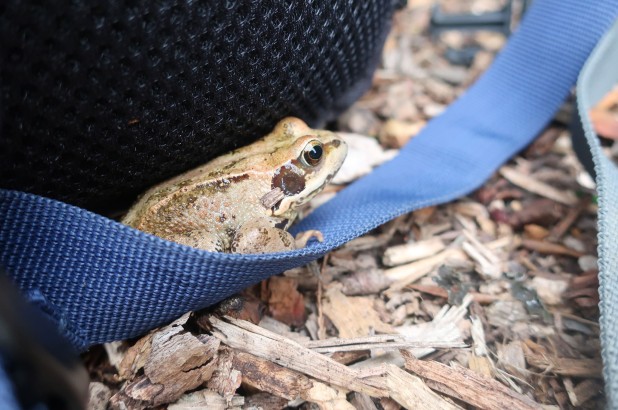 Frog (Rana temporaria) avoiding a shower by cowering under my knapsack.

Much more appreciative of a wash was this little Chiffchaff (below). We rarely see them in the garden, but every now and again they appear alongside the Tit tribe to make use of our waterfall/fountain. In fact, I couldn’t decide whether this was a garden warbler or chiffchaff so I asked for an ID on Twitter and was pleased to have a number of responses. Apparently its darker legs/feet are significant indicators in this ID. If I had heard it sing then that would have been the giveaway!

Chiffchaffs are usually summer visitors to the UK, arriving as early in the year as February and typically leaving during September. However, in the South and East of England some have recently begun to overwinter. So will it stay or will it go? I will keep an eye open for it, but I’ve only seen it the once so far.

Another migrant I spotted on the bubble fountain during September were these Blackcaps. This was the first time that I have seen them this year. I took pictures from the kitchen window and when I checked later I could see two females blackcaps and one male in a couple of frames. The shot below was the clearest though, with just the pair of them. 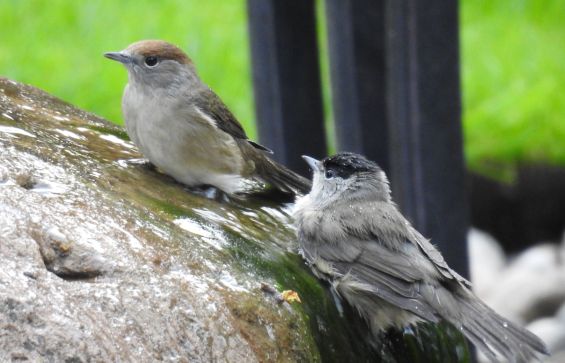 On looking up some details for Blackcaps I discovered that they have also begun to establish residency in much of the country. This is a lovely, if slightly worrying, trend!

September does seem to be a good month to spot birds: Probably down to abundant food supplies and increasing visibility in shrubs and trees as the trees begin to lose their leaves. One of my favourite regular bird visitors is a goldcrest. I often see him in the early evening, taking a bath. He hops down from the dense cover of a cypress, but I know when he is around from his high pitched call.

He also likes to sneak in among a chaotic flock of tits that stops by and his plaintive tweets punctuate their raucous calls. 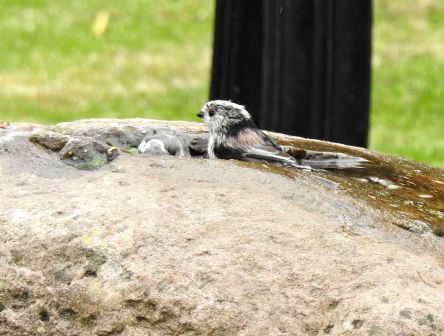 Our new, large pond is settling down well and is creating a different environment in the centre of the garden. Did I tell you that we’ve added fish? A few small goldfish and some Rudd (after seeing them flash their red fins winningly as they swam around the lake at RHS Hyde Hall).

I was very anxious for them for a while after adding them, because the dragonfly nymphs are fairly large now and very active. I think that they could take on a small fish. More of these predators are being added all the time, see below:

Also the Great Diving Beetles, that were the first wildlife to find and move into the pool, have grown and grown over the summer and are now a good 3cm long and look like armoured tanks:

They are enough to scare me, let alone a small goldfish. Happily, we only seem to have lost one fish since adding them a month ago and I am not sure what caused its demise.

I only discovered this species a couple of years ago, so I don’t have a good baseline for comparison, but I have seen them consistently throughout this summer. However, recent monitoring by UKBMS have shown Small Coppers to be in steep decline. There are some suggestions that this is through habitat loss, but also that climate change is causing their host plant (sorrel) problems through excessively dry conditions.

Finally, bees and bumbles are making the most of late season flowers like salvias, 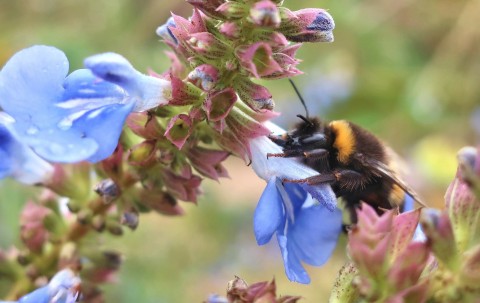 So far then there is no let up in the pace of activity from summer, but there is noticeable stockpiling going on from bees to squirrels. Let’s all get the harvests in!

10 Responses to September Wildlife Sightings – On the cusp