Six on Saturday – In between Lemsips

I’ve been snatching moments in the garden this week, in between sneezing and coughing and guzzling vitamin C and Lemsip. There’s been a bit of tidying, a bit of potting up/on and a final bit of bulb disposal (OK planting, but at this point I just want to get it finished). However, now the substantial array of pots containing bulbs is currently causing me grief because something is steadily burrowing in to eat the bulbs. I’ve covering the pots with old wire shelving from a couple of defunct plastic greenhouses, but the excavations are still appearing, so it is not blackbirds or squirrels … something smaller … I’m thinking mice or voles. I know that there are both around here. I’ve double layered the shelving and covered them in fallen birch twigs now too, but I am still seeing holes. I need to go buy some chicken wire before I get too depressed.

Anyhow, I’m joining in with Six on Saturday hosted by The Propagator. It’s a growing phenomenon and there are tons of interesting observations to check out in the other SoSs.

I found these pretty purple mushrooms round the back of the greenhouse, under a birch tree, in the area I was potting up all the bulbs. I am fairly certain they are wood blewits (Lepista nuda), but I’ve no idea how they came to grow there. Having said that I am wondering whether the compost I use has something to do with it, because last year I found them in one of the raised vegetable beds at about this time of year. Anybody else experienced the same thing?

I like to leave as many seed heads on plants as I can over the winter, for interest and wildlife. Echinacea takes the interest one step further though as, once the seeds have dropped, the core of the flower has a fantastic shape and texture. Decorated with frost or snow (we don’t usually see that much here in East Anglia) the empty seed heads are an attractive feature well into winter. 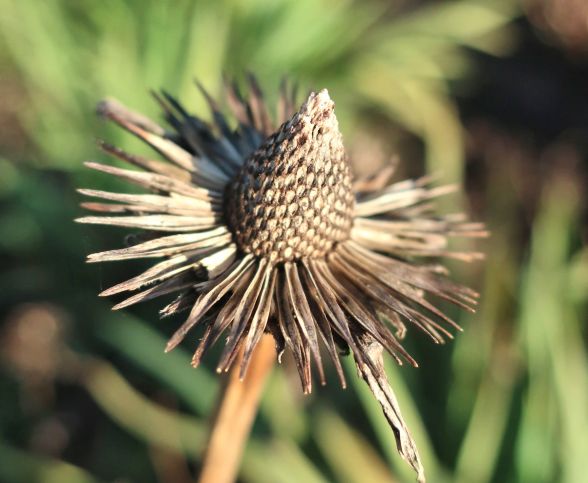 It probably isn’t a surprise to anybody who has grown this Mirabilis before, but it was to me as this is the first year that I have tried M. longiflora ‘Angel Trumpets’ from seed. I first saw these flowers growing at Cambridge Botanics last year and was super impressed with their luxurious, scented, white trumpets, so thought to give them ago at home (Chiltern Seeds sell them). They grew easily, but I neglected them and while they put out lots of top growth, I didn’t actually get any flowers. I was tipping up a discarded module tray into the compost last week when I discovered that there were fat tubers in each compartment. I’ve fish them out and replanted them to overwinter in the greenhouse, because when I checked the website it said … ‘the tubers will survive mild frost in the winter’. Hopefully I get to try them again, from a running start this time. 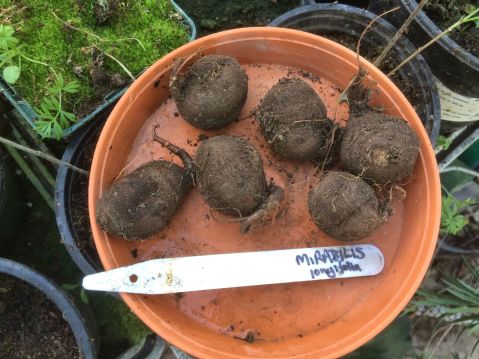 Mirabilis longiflora (not *folia as per label in photo)

Having lost most of the fish in our pond to a young heron (inset), we decided to give the fish a bit more protection, or at least more places to hide, in the form of large chunks of drainage pipes. So Steve went to a builders merchant and paid way too much for some interestingly shaped bits of clay drainage pipes (as seen on decking). Mid-week I found myself wading into freezing water to place the pieces. I am still thawing out!! 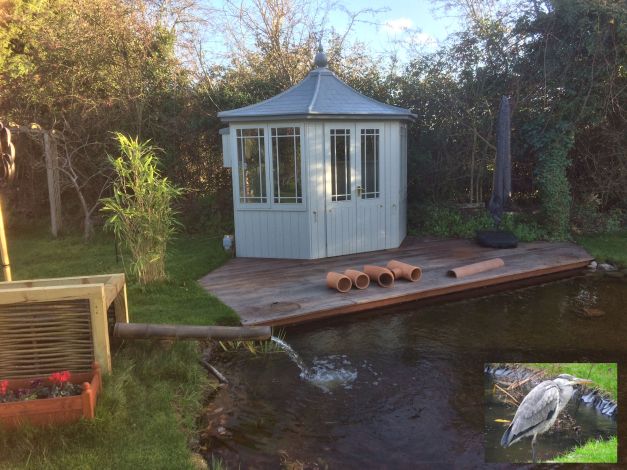 New caves to hide from the heron

I found an overlooked pack of turmeric at the back of the larder last week. It has obviously given up waiting to be used and decided to continue growing. So I’ve potted it up and am waiting to see what will happen next. 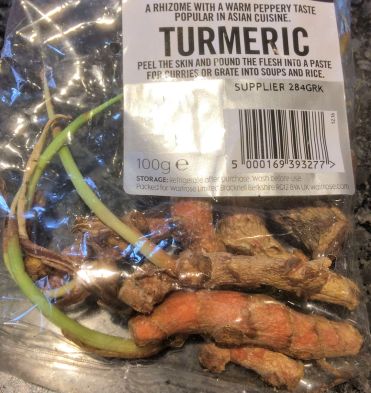 An experiment … will turmeric grow in a pot on a window?

I was looking for presents in the local garden centre, when I came across a lovely display of begonia rex. Now I am terrible at keeping begonias alive, but I am going to try again because I couldn’t resist those metallic colours and patterns (plus I really love the spiral one).  A Christmas present for myself I think. 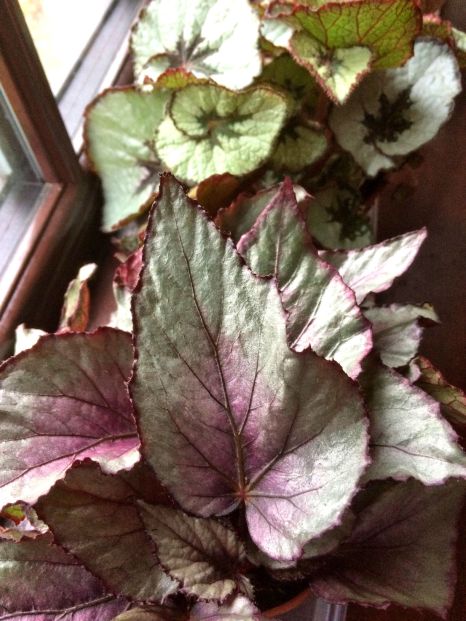 So those are my Six.

I hope that you are having more success with your Christmas preparations!

Living in the damp middle of nowhere
View all posts by Frogend_dweller →
This entry was posted in Six on Saturday, The home garden and tagged #SixOnSaturday, Begonia rex, Gardening, Mirabilis longiflora, Photography, Turmeric, wood blewits. Bookmark the permalink.

17 Responses to Six on Saturday – In between Lemsips

A Blog About Gardening Plus A Little More

Thoughts about life, living, and gardening....

STOPS ALONG THE WAY

The wildlife of a small market town...