It’s been wet and whilst we’ve not had it nearly so bad as Wales and the Midlands, outside jobs this week have been severely curtailed. I’ve been distracted in any case by a new car with, what seems like, hundreds of new displays and everything in the wrong place. Actually it’s lovely, just different!

And now we’ve reached Saturday and I am not sure there’s been any progress at all on the plant front. Nevertheless, here are my Six for The Propagator’s Saturday gardening roundup: Half wins, half losses.

The crab apple tree (a John Downie) on the driveway is absolutely loaded and aglow with rain polished apples this year. Happily, there’s also vastly less scab on the fruit than last year. Shame I’ve just filled the last of the saved jam jars with bullace jelly and really don’t need more preserves. Already the tree is full of birds (mostly wood pigeons it must be said), so I’ll probably just be leaving this crop for nature. Hurry up fieldfares and red wings, otherwise you’ll miss out!

Double digging!! Something (squirrel most likely) has been digging up the new bulbs

It looks like every single spot that I’ve planted with either snake’s head fritillaries or wild daffodils has been re-dug and emptied of the contents. What a shame! I am hoping the bulbs planted in previous years are still there and quietly bulking up. I might have another go if I see some sale bulbs and plant them deeper (or temporarily in protected pots).

3) Joy – Second flowering from the delphinium 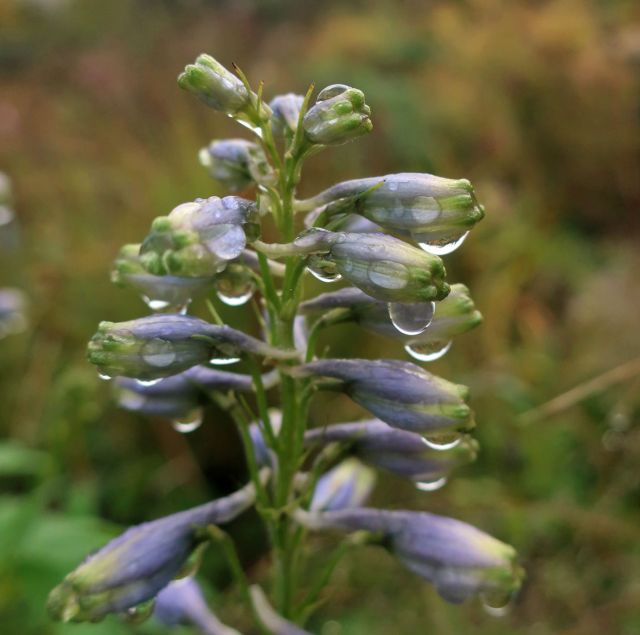 Delphinium, unusually in flower in November

I am happy to see a second flush of flowers on the dephiniums at the back of the border. They are next to some lovely pink, spooned ‘Emperor of China’ Chrysanthemums and it is great (and unusual) to see them to in flower together.

The turmeric that I found sprouting in the back of the larder late last year has been an interesting, but ultimately unsuccessful experiment. It grew on very well indoors and, come June, was potted on and placed on the patio to enjoy a hot summer outside. I’d read that you should be able to crop it in 7-10 months and, being the UK, 10 months seemed the safer bet. This week I realised I needed to harvest it or protect it, so I knocked it out and found nothing. No new rhizomes at all. 😦

5) Joy- The dwarf pomegranate is starting to flower

These buds had formed before it come in for the winter, but more are forming every day

My two, grown-from-seed, dwarf pomegranates have also spent the summer outside and it seems to have rejuvenated them considerably. They’ve come in out of the cold and are now developing flower buds all over.

New Oca tubers forming as the weather cools down

The Oca tubers were a bargain buy that started out badly, but went in the ground anyway. They’ve appeared to do very well. They’ve spread to cover a sizeable patch. At RHS Hyde Hall in September I noticed that theirs were flowering. Mine haven’t done that, but I don’t suppose that it matters. They are a crop that develops as the weather turns colder, so with light frosts occurring for the last month I thought that I might investigate what was going on underground (no I don’t cheat on Christmas presents and the like, honest!). Well, the answer is that there are lots of very small nuggets forming, including from all the rooting bits of top growth, but the tubers are they only size of walnuts … maybe even peanuts! Since there is no more frost forecast for the foreseeable future, I patted the whole lot back down and I’ll give it another couple of weeks .

Next week I hope to plant the rest of my bulbs and in preparation I’ve been in the garage cutting up sections of chicken wire to cover the pots. It’s a squirrel deterrent, but the vole has previously managed to get through the gaps, so I will try two offset layers and keep my fingers crossed.

Don’t forget to visit Jonathon’s Six-on-Saturday home base and may be tell us how your own gardens are growing.

Living in the damp middle of nowhere
View all posts by Frogend_dweller →
This entry was posted in Six on Saturday, The home garden, Vegetables and tagged #GYO, #SixOnSaturday, crab apples, Dwarf pomegranate, Gardening, Grow you own, Oca, Turmeric. Bookmark the permalink.