Six on Saturday – Freckles, blushes and other floral markings

It feels like the kind of day that could do with a bit of energy injected into it by joining Jonathon’s Six on Saturday. There are rules of course, but they’re a breeze and it’s great fun to browse through the links to other Sixes to see what’s going on with similar-minded plant/garden obsessives.

My orchid collection is growing and it’s not really my fault. First off, I discovered that the ones sat by the till were being chucked out (well honestly, what would you have done?), then I was given some miniature orchids by my sister who works in turf (! I didn’t ask) and then a gardening friend handed me a plant that looked like canes, but was apparently an orchid, which didn’t ‘do’ in her house. Well, I went to water that last one this week and found it covered in flowers, white with a hint of blush at the edge. So I finally looked it up and now believe that I have a Dendrobium nobilis. Luckily, so far it seems to be as stoic as the moth orchids.

2) Hellebores – A good place for freckles

I have lots of seedling hellebores in the front garden, mostly they are in shades of pink, having crossed from plain parents. However, over the last couple of years I’ve tried to purchase a few more interesting varieties with speckles or double petals, so that I can do the floating flower bowl thing. It may take a couple more years though, because they are being a bit slow to bulk up. Happily, Hellebore ‘Harvington Speckled Yellow’ is looking pretty strong this year and absolutely beautiful. 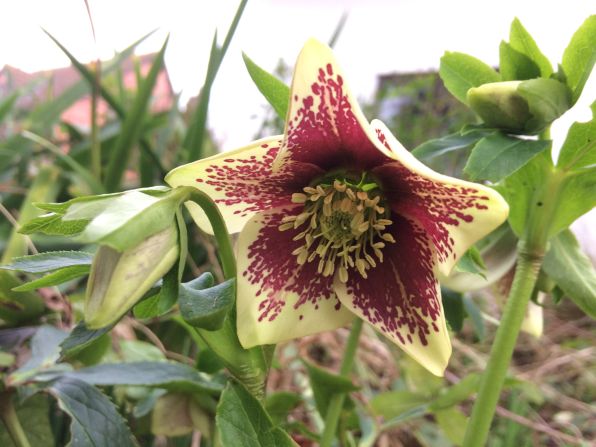 This is a rather glorious Hippeastrum ‘Bogota’, one of the so-called Spider Group. Last year I tried ‘Sumatra’, which I loved, but that hasn’t restarted quite yet. More to look forward to though. 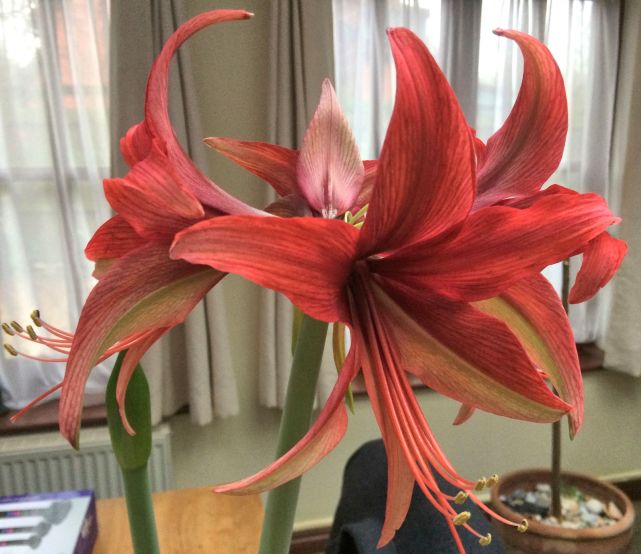 Last year I had a fairly young Hedychium densiflorum in a terracotta pot behind the glasshouse and it managed to put up three or four flower spikes. When I decided to move the rhizomes into the garage for winter I discovered that it had set a few seeds. Nine to be precise. So I soaked them for 24hrs and placed them on damp tissue in a sealed bag in the airing cupboard. 48hrs later I could see signs of life, so I potted them up and put them on a windowsill (still inside a plastic bag). This is them 3 weeks later. Not bad! 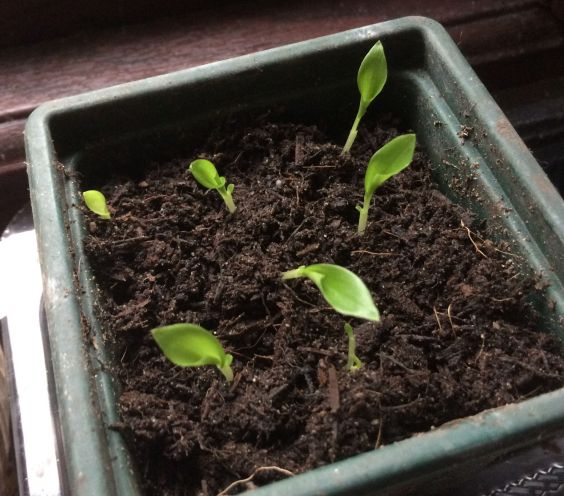 It is cheering at this time of year to see any signs of new growth in the garden and one plant that is putting on an elegant show is Arum italicum subsp. italicum ‘Marmoratum’. The leaves can be used in flower arrangements, but perhaps best is to just use one leaf as a sheaf around a few single snowdrops for a stunning little posey.

This Winter heliotrope, Petasites fragrans, isn’t growing in my garden fortunately (it’s a bit of a thug), but is growing in a huge swathe under the hedge by the local bus stop. I love to pick a couple of flower spikes at this time of year to enjoy their scent. It is strong though and can be quite overwhelming, but who can resist the smell of cherry pie?

That’s all folks … Have a good weekend!

Living in the damp middle of nowhere
View all posts by Frogend_dweller →
This entry was posted in Six on Saturday and tagged #SixOnSaturday, Amaryllis, Arum, Gardening, Hedychium, Hellebores, Orchids, Photography, Winter heliotrope. Bookmark the permalink.

14 Responses to Six on Saturday – Freckles, blushes and other floral markings