In spite of all the named storms and gusty weather sweeping across the country, our bird feeders have been exceptionally busy throughout February. In fact there is a correlation: The nastier the weather the more likely we are to see hoards birds on them. We’ve not seen anything out of the ordinary to report sadly, but birds are always entertaining to watch nevertheless. 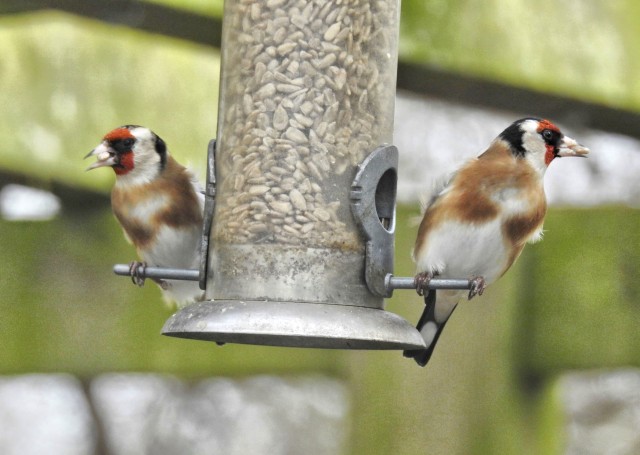 Goldfinches like to partner with each other and typically stay for some time on the feeder. This pair braved high winds on swinging perches to eat in tandem.

There is always a baseline number of chaffinches present when the feeders are active. They used to be content hopping around on the ground collecting dropped pieces of seed, but over time the chaffinches have become more courageous and now jump around the wisteria overhead, watching for openings at the feeders.

Often they don’t bother with the perch at all, just hover and snatch up a nut/seed,

but in quieter periods they will also settle and gorge … until they are displaced.

Actually, chaffinches are probably the most catholic and aggressive displacers themselves. Other birds tend to arrive in teams and tag each other at the feeders, but I’ve noticed that chaffinches don’t care who is there first. They will take on every other kind of bird. Literally throwing their weight around. Here it is a smaller blue tit, getting a quick snack, (but hasn’t noticed the looming chaffinch!) 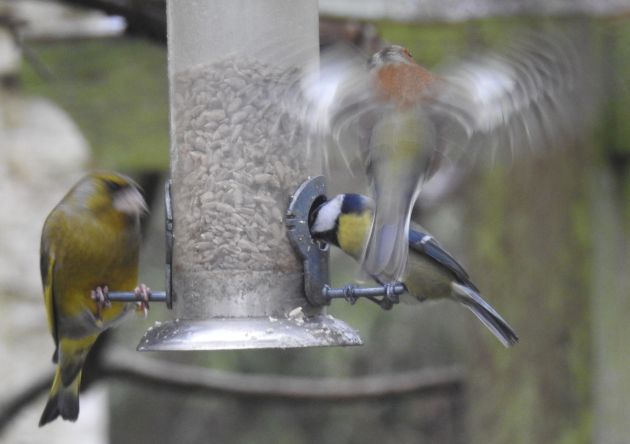 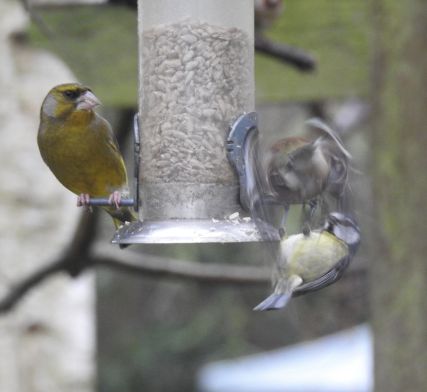 Blue tits will use any of the feeders, wherever they can squeeze in, but in order of preference seem to choose those filled with peanuts, then fat balls, then sunflower seeds. Here are a couple squabbling over said fat balls:

I was tempted to put speech bubbles on this one. What do you think they are saying/shouting to each other?

And here is a general shot along the front of the pergola where the bird feeders are hung. See how convenient the wisteria is for quick access to the nuts or for private retreat to chew on retrieved seed. Notice how the blue tits are everywhere … except for that one on the left filled with wild bird food! I bought that when I couldn’t get hold of sunflower seeds and it has not proved not popular. Hardly anything eats the mix from the dispenser, apart from occasional robins and dunnocks. 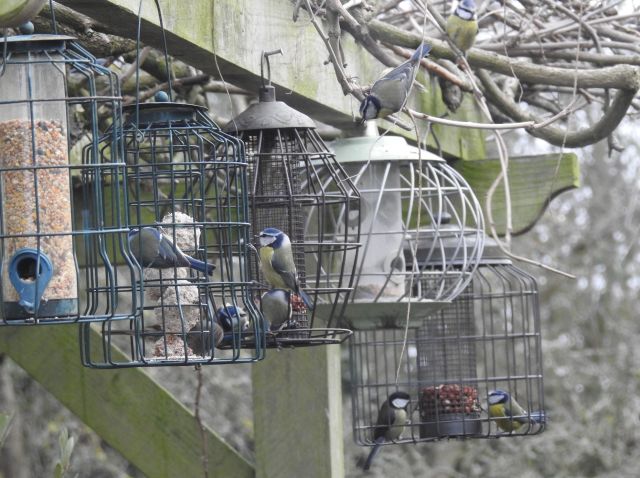 When the mixture is spread on the ground or table it is a different matter though.  This fine pheasant is happy to clear up dropped wild bird mix any time.

And then I noticed another visitor chowing down on the stuff that Steve had spilled on the table top.

P.S. We don’t own a cat and I typically discourage this one so that the birds are safer.

It didn’t last long after that (the wild bird mixture, not the cat)!

I am joining with Tina @mygardenersays in celebrating Wildlife Wednesday. Check out her wonderful post on Butter Butts (I am not joking. Go look!) and check the comments section for further wildlife stories.

10 Responses to Trapeze artists … and other high wire performers