As well as rain (for which I am very grateful), clouds of flea beetles seem to have descended on the garden this week. They are all over the poppies and roses, but are also consuming various leaves in the vegetable plot, particularly the peppery salad leaves and Cima di Rapa. I was really hoping that we’d escaped them this year. Ah well, since they are late we’ve already enjoyed some good pickings and must live with them.

But now it is time for ‘Six on Saturday‘, a weekly opportunity to share our gardening triumphs, problems, purchases, projects etc with like minded folk via the ever efficient author of this meme Jonathon aka The Propagator. Click through to his blog to follow the trail to other Sixers.

I decided to up the beauty of the vegetable plot this year, not only by inter-planting with companion flowers such as tagetes, pot marigolds and cornflowers, but by choosing veg. varieties that are intrinsically attractive such as ‘Shiraz’, a purple-podded mangetout and ‘Crimson-Flowered’ Broad beans. They are in flower now and look like they will produce a good crop: 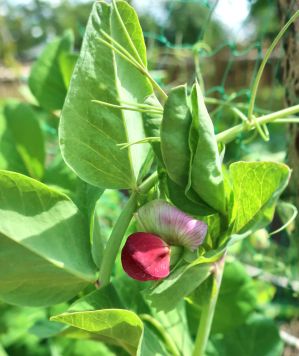 What is under the gooseberry bush? Not much! The branches were so laden that they were on the ground. I tried a few at the beginning of the week and discovered that they are ripe, so it is time to pick this crop. So far we have had stewed fruit with custard. Classic. I’ve frozen some for later and now I have this bowl full. What shall I make? Fool or crumble?

With the few left on the bush I was considering making gooseberry gin. They seem like they’d be the right kind of flavour for such an endeavour. I’d grow more of them if only the bushes didn’t have thorns!

I bought a hyssop ‘Kudos Golden’ last year (there is a whole Kudos series). It overwintered fine and is once again loaded with flowers, but I also took cuttings and am now in the enviable position of finding homes for them. 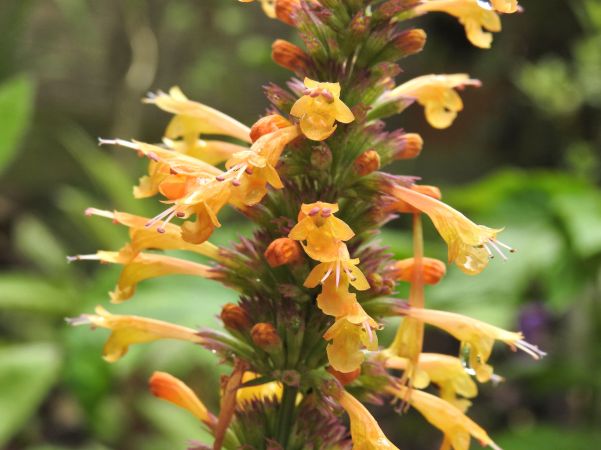 This one is now located in a freshly emptied bed behind our new stone fountain. Bees love them too.

This is one from the ever delectable selection of David Austin roses. It is described as seashell pink and it really does remind me of those tiny pink clams I used to collect as a child.

I bought these from Special Plants Nursery as jumbo plugs, just after we went into lockdown (when they decided to shed some stock rather than pot them on). They have not had a chance to bulk up much yet, but they are in flower. The colour is wonderful against perennial wallflower ‘Bowle’s Mauve’ and all those blue shades of salvia like ‘Amistad’ and the Wishes series.

For years I thought Tradescantia were only indoor plants in the UK, with stripey purple leaves cascading down walls from macrame hanging plant holders (OK that may just be my parent’s house). Now I know better and I love it when my white one opens up its ultra-clean, three-petalled flowers. The flowers are worth a close look. I love that cloud of white puff surrounding the stamen. Hoverflies are very keen on them. I am not sure what type of bee is on the one in the photo (possibly an andrena of some kind).

Plus, I have a friend who (I discovered via #Lockdown correspondence) has other colour variations and she has promised a couple of divisions in the autumn.  Result!

That’s all folks! I hope that you’ve enjoyed the rain this week. We (the gardens) needed it.

19 Responses to Six on Saturday – Good enough to eat!