The bit of the lawn that still gets mown was cut bright and early this morning, before the temperatures started to get a bit melty. This provided a lovely velvet surface for our apples fall on to. In fact I’ve been getting a bit worried that the ‘June drop’ is going on for far too long this year and am wondering whether there will be any apples left to pick when they are ripe! Well, I’ve just discovered the real reason for the drops. While we were sitting out, having a cuppa, it became clear that the continuous fall of apples is nothing to do with climatic conditions, but rather more to do with the large numbers of blackbirds (there were several successful nests this spring) that now frequent the garden. The blackbirds are currently jumping around our Grenadier apple tree (an early cooker), pecking at the stalks and adjacent flesh, until the swelling fruit give in to the inevitable pull of gravity.

But now it’s time for six garden things for Jonathon’s Six on Saturday.

Let’s start with a plant a friend introduced me to this spring:

We planted a couple of drifts of glossy seedlings of Delphinium requienii in the borders at Wimpole towards the end of April. They were protected initially from rabbits, but grew on strongly and remained untouched. Remarkably, we also discovered that slugs DON’T make straight for the plants, in spite of the genus! Those glossy leaves are tough and grew into very attractive mounds. In June the flower spikes began to emerge. I absolutely love the dusky mauve/pink tones. They were planted up with Ammi major, but those have been slower to establish and aren’t providing quite the frothing sea I’d imagined the spires emerging from. The delphinium are definitely worth repeating though. 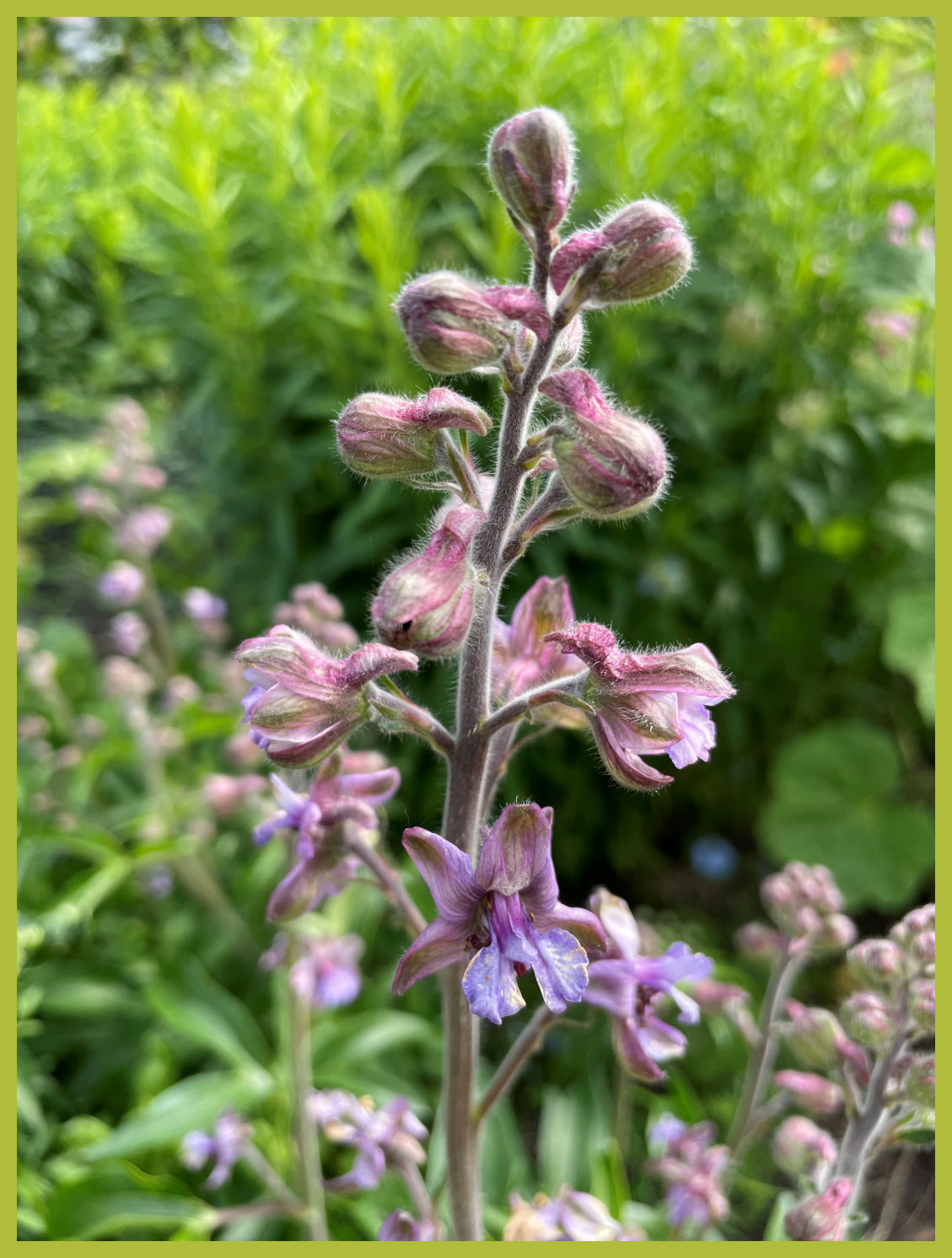 In the same way that Lychnis coronaria provides that shot-in-the-arm pulse of magenta in any bed, this tough dianthus gives a similar burst of shocking-pink colour to the border. It also has great stamina, flowering all summer long, provided it is deadheaded. Modelling the dianthus is a brimstone butterfly, which conveniently provided good visual contrast for the photo.

Monarda ‘Cambridge Scarlet’ is making quite a picture just now … and no mildew yet either!

I’ve been contemplating some prairie planting at the edge of our wild meadow patch, so this year I’ve been trying out betony (Betonica officinalis ‘Hummelo’) to see what sort of presence it has in a mixed border. In contrast to the floppy annuals (eschscholzia, poppies, cornflowers) surrounding it, betony looks remarkably strong and upright. It’s got a nice amount of colour on each spike too. It gets a thumbs up from me and will hopefully be even bigger next year … until I split it at least.

I’ve grown these for the first time this year and have been blown away by the scale of the flower compared to the diminutive size of the actual plants. Like most poppies, they are loved by bees and, as demonstrated by the photo, hoverflies.

Dieramas always seem to add graceful movement and height to a border. This one (probably basic D. pulcherrimum) was grown from seed collected and sown several years ago, but has taken ages to get round to flowering. I don’t seem to be any good at getting them to bulk up. I have Dierama ‘Blackbird’ languishing in pots at the moment too. Not sure what I am doing wrong, ‘cos the first time I grew them I’d swear they flowered the first year.

So that’s my six. What are yours?

Keep cool and have a good weekend!