A Life of Dependency: A surprise encounter with a parasitic plant

On yet another recent dog walk (great things for discovering stuff about wildlife and nature) and buoyed up after discovering some spotted orchids in the fields across the back, we stumbled on a strange looking plant in a meadow. It had a short spike of pale purple and brown tinged flowers and stuck up above a backdrop of mixed grass, ox-eye daisy and clover. 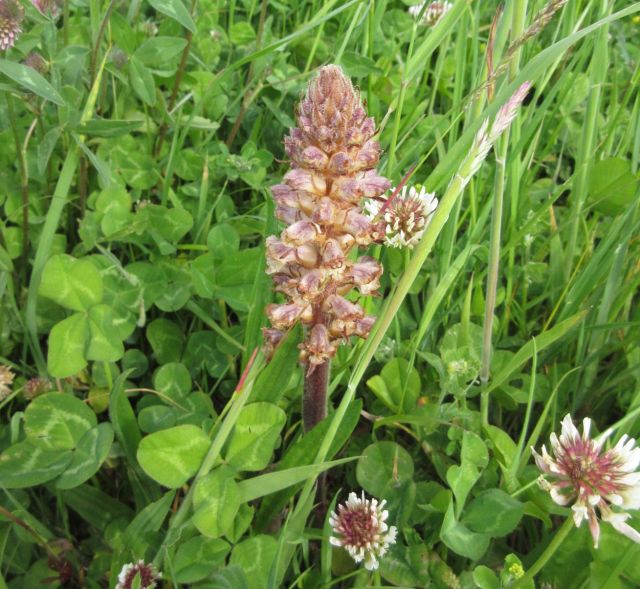 In fact we were patrolling the area looking for four-leaf clovers, so that we could present our kids with home-made ‘Good Luck’ cards for their then upcoming exams (all over now thankfully). Happily we managed to come home with a handful of four and five leaf clovers each, because once you have found one oddity, there’s a good chance that same plant will sport more mutations. 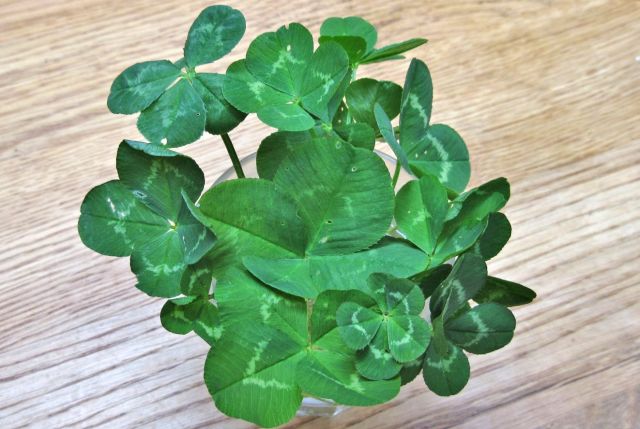 A handful of four and five leaf clovers

We had no idea about the identity of the purple and brown flower though, so I knew I would need to resort to my trusty Collins Wild Flower book when I got home. In the meantime we noticed that the flower was not an isolated occurrence, but appeared in small numbers in several patches amongst the clover. The flower spikes typically reached a height of between 20-30cm, with no obvious leaves to be seen. The whole plant was covered in sticky looking hairs.

So, in a grand reveal, I can tell you that we were admiring an example of Common Broomrape, Orobanche minor. Common Broomrape turns out to completely lack chlorophyll, its leaves are scale-like and it is therefore parasitic on other plants for the provision of the nutrients it needs. It is parasitic on a range of host plants, but particularly on clover, wild carrot and members of the daisy family.

The seeds can lie dormant for a number of years, until stimulated into growth by particular secretions from a suitable host plant. Once germinated, they producing a root-like haustoria, which penetrates one of the host’s roots and taps into their water supply and nutrient production. (See Heather Kelly’s Blog for clear account of parasitic plants, including the lifecycle of Broomrape with diagram ).

Unfortunately, Broomrape was accidently exported to the U.S. with clover seeds and (whilst not dreadfully invasive) it has now established itself as a nuisance to certain crops, including tobacco and various legumes.

Living in the damp middle of nowhere
View all posts by Frogend_dweller →
This entry was posted in Nature, Out and about, Plants, Whimsy and tagged clover, Common Broomrape, meadow, nature, Orobanche minor, Parasite, Parasitic plants. Bookmark the permalink.

4 Responses to A Life of Dependency: A surprise encounter with a parasitic plant