In a Vase on Monday: Rain and Rainbows

Suddenly summer has turned wet, grey and cool. I’ve taken to carrying out daily checks for tomato blight, ‘cos I have a lovely crop just ripening in the raised beds that I don’t want to lose. The downpours have been impressively heavy, sometimes thundery, between hot sunny intervals. So my vase is a mixture of plants responding either positively to the suddenly available moisture or those cut to minimise some damage. 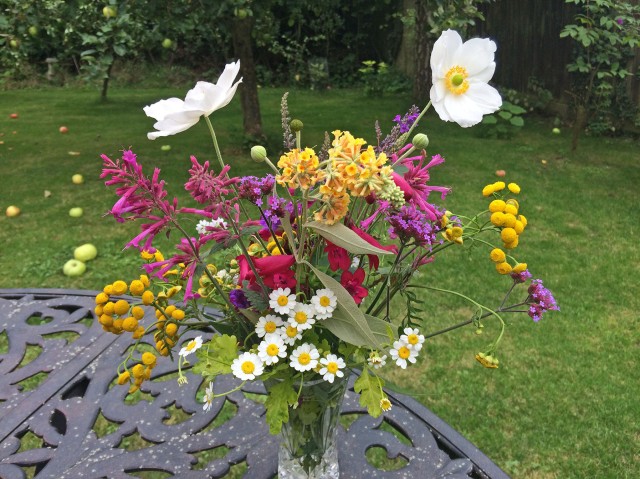 For instance, the japanese anemones (Honorine Jobert) are currently looking quite lovely against the fir (OK leylandii) trees, but the tansy has been whirled around by the winds and now looks as though it has fallen out of a washing machine. Its limbs were also damaging the surrounding plants, so it has been pruned judiciously.

I’ve included a piece of Buddleja x weyeriana ‘Lady de Ramsey’ in the vase. This was taken from a rooted cutting I saved from Wimpole. I can’t make up my mind whether I like this shrub or not, largely because of the way the flowers fade in patches to a brown mess. So it is sitting in a pot for the time being, gradually getting larger (and probably rooting into the gravel). 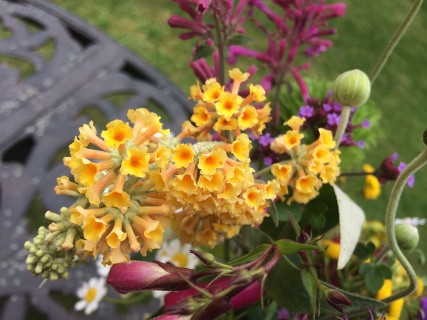 I’ve also cut some Agastache ‘Bolero’, grown from seed this year, which I am really happy with. Last year’s bought pot-grown plant didn’t over winter in the garden, so I am hoping that these have more chance. Even if they don’t, I’ve discovered that they look good in one season. 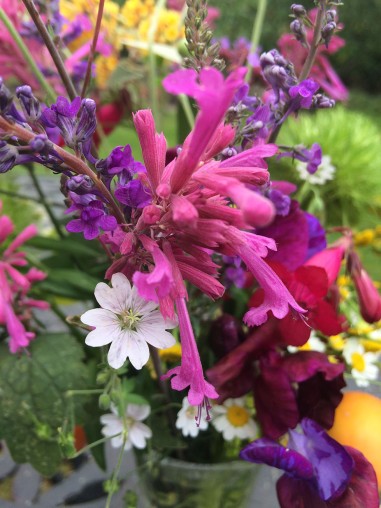 Vase fillers are made up from some golden feverfew, a white form of Geranium pyrenaicum ‘Bill Walllis, some spikes of Verbena bonariensis, a couple of sweet peas and Penstemon ‘Andenken an hahn’.

So that is my rainbow bouquet, in spite of the rain. Except, then I decided that the arrangement needed a bit more green and that is how this final photo includes some Dianthus ‘Green Trick’.

Maybe it doesn’t need them, but after being disappointed by Green Trick’s performance in a trough with Erigeron karvinskianus last year, I thought that I would highlight the fact that I have been very pleased that the original plants are once again blooming nicely in the planter this year!

This is my contribution to Cathy’s popular In a Vase on Monday meme. It is worth hopping across to see her/Brian’s perfect dahlias and to check out the vases being put together around the globe.

Living in the damp middle of nowhere
View all posts by Frogend_dweller →
This entry was posted in Flowers and tagged Agastache 'Bolero', Buddleja x weyeriana 'Lady de Ramsey', cut flowers, Gardening, Horticulture, In a vase on Monday, Photography, Rainbows. Bookmark the permalink.

18 Responses to In a Vase on Monday: Rain and Rainbows