Six on Saturday – Doldrums and dreams

I hope you had a wonderful Christmas. We had a lovely time with family, but there’s been a lot of cooking. For the main meal I had planned to served home grown parsnips and carrots as part of the Christmas meal, but our parsnips struggled to grow in the dry weather over the summer and my carrots are not as sweet and succulent as they should have been. I decided not to use either and in the end some token sprigs of parsley were the only input from the plot. Did you do better?

I hate this bit of the year. It’s too damp, dark and dismal. The garden is looking forlorn and I’ve been avoiding seeing the various messes I need to clean up. It will be different next week though, once we click through to 2019 I’ll be all action. Promise. I am joining in with a final Six on Saturday for the year, grown and tended as usual by The Propagator.

Seed catalogues have started popping through the letterbox this week.

2019 seed catalogues being to arrive

Tea breaks are suddenly taking longer with such browsing material available. Admittedly I have tins and boxes full of seed already (unsorted of course) and I know that I bought tons of packets in the pre-christmas clearance sales, but even so … there are dreams and adventures in those books. I shall be scouring their pages for my plans to mimic some of Hyde Hall’s Global Vegetable plot.

Pansies and cyclamen are currently brightening up the pots, troughs and edges of the garden.

I don’t know about you, but when I buy pansies I take a ridiculous amount of time staring into their little faces to choose the ones with the prettiest patterns. I love heirloom look-alikes and almost any with whisker marks (as above). They look great potted up in individual tall terracotta pots, surrounded by moss and displayed in theatre style (as you might for auriculas).

A friend from Wimpole gave me a new trowel for Christmas. She knew that my old one was a little the worse for wear (and that I have a habit of misplacing it). When I compared the two side by side, before replacing it in my bag, I was rather shocked by exactly how worn the old one has become.

It’s no wonder I was accused of planting tulips too shallowly!

The front garden has a couple of rather large patches of cyclamen hederifolium under a central maple tree. Their autumn flowers may be long gone, but beautiful marbled leaves are still lighting up the ground. Those leaves are like hand-crafted tie-and-dye hearts. Each one is different yet perfectly formed, crimped and themed. For some reason they also make me think of cooking ring donuts, with the bubbles erupting from the centre and continuously moving outwards.

5) Leave pruning to the deer

Who knew that deer were such big fans of laurel? I thought that nothing liked laurel. I found out the hard way when I planted a protective laurel hedge around the vegetable plot. It has been attacked a few times over the years. I should have thought about that when I planted this little aucuba in a dark corner a couple of years ago. I didn’t make the connection, but once I spotted that the shrub was taking some damage I put chicken wire around it and its been fine ever since. This summer it put on a nice lot of growth and out-grew its protection. Last week, when I was prowling around looking for ‘decking the halls’ foliage, I discovered that it really needs a much bigger cage. A deer has trimmed the plant for me. It is now flat-topped and reduced back down to the top of the wire. 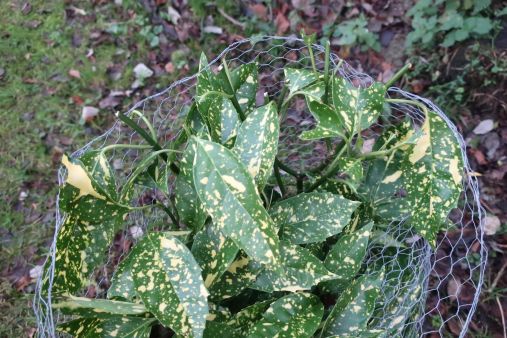 The front bark path needs a good weed. I noticed this when I was checking for hellebore flowers after seeing photographs of early examples on various blogs. The path has a lot of newly germinated cleavers (Galium aparine) growing it in. I blame the dog. She has always got the sticky burrs in her fur! Anyhow, I discovered this year that you can make a refreshing tonic from the tops of the plants. It is simply made by placing the washed tops from a handful of cleavers in a jar of cold water overnight (in fridge). Next morning simply strain off the liquid and drink. Its flavour is surprisingly similar to fresh peas, light and tasty. The plant is packed full of all sorts of medicinal properties. This infusion primarily acts as a lymphatic tonic. Great news of course, but does means that anyone with existing medical conditions should check its possible effects before using.

So those are my Six for the last Saturday of 2018. What are yours?

Living in the damp middle of nowhere
View all posts by Frogend_dweller →
This entry was posted in Six on Saturday and tagged deer, Galium aparine, Gardening, marbled leaves, Photography, Seed catalogues, tools. Bookmark the permalink.

13 Responses to Six on Saturday – Doldrums and dreams