It is Six-on-Saturday time and the weather is perfect for it: Photos in the sun and then blogging when the heavens open. As the season progresses the variety of Sixes is getting more and more diverse and interesting, so head over to The Propagator’s blog to see today’s selection.

Like many people, I would guess, I am pulling rhubarb. I like to eat it stewed or braised, rather than cooked as a crumble (because all that delicious juice just seems to make the crumble soggy and solid). Rhubarb is also great baked until chewy and then added as the fruit component of a scone mix (a National Trust twist I believe). Now my Dad could eat rhubarb without added sugar, but that seems like teeth grinding torture to me, so to keep the amount of sugar down I’ve been trying the trick of adding sweet cicely  (Myrrhis odorata) to the pot. The light aniseed taste of the herb seems to mellow the sharpness of the rhubarb and adds another layer to the overall flavour, so it is a win-win result. 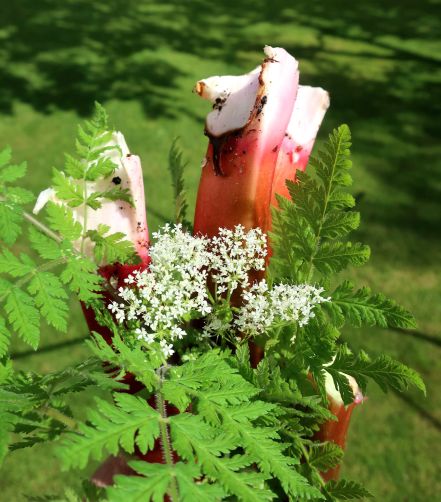 The honey lilies (Nectaroscordum Siculum) in the dry, shady front garden have started to break out of their tissue wrappers. Currently there are only a few with hanging bells, but as the next couple of weeks unfurl they are going to look a picture. There is something so nice about their soft colours. Then there is the amazing strength in their crazy twisting pedicels: First off they explode all over the place, next they elegantly arch down, then finally, as they set seed, they point rigidly upright. 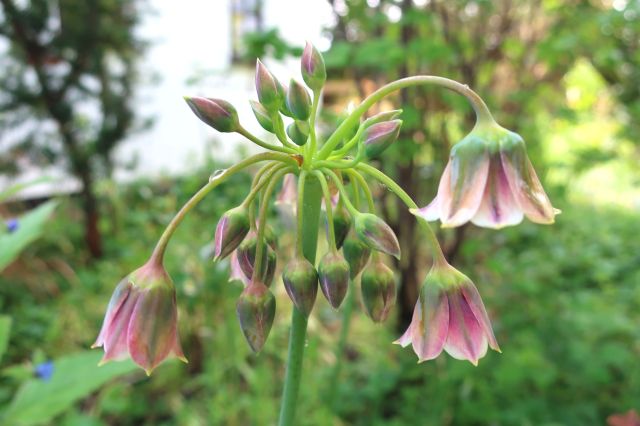 3) About a one in five survival rate

Our wisteria (W. floribunda ‘Violacea plena’) was hit by a series of frosts again this year. 😦 .  It had the effect of suspending the development of roughly 80% of the racemes. Luckily, the freeze happened sufficiently early that the new leaves were untouched and are now making a great back drop to the beautiful, surviving flowers. With all the black rain clouds around the colours are looking very dramatic in any stray sunshine. 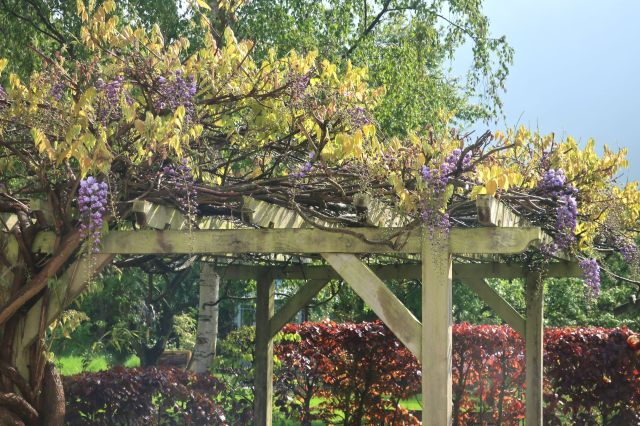 Wisteria once again pretty wrecked by frosts this year.

Everytime I go into the greenhouse recently I am overwhelmed by the glorious scent of Carnation ‘Mrs Sinkins’. I was really pleased to be given some rooted cuttings by a friend, after enthusiastically admiring them in her garden. (The best gardeners are always generous I find!). The flowers are pretty fantastic too, looking like an explosions of white egrets. Now I just have to get them out of the greenhouse and into the borders before they become too unwieldy. 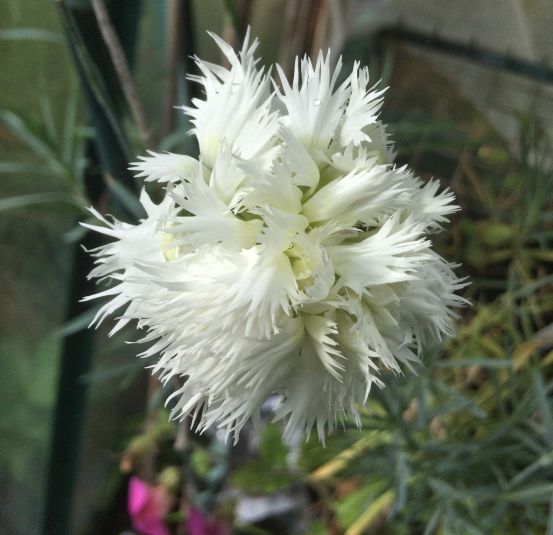 Rehmannia elata are like foxgloves on steroids. In fact they are also called Chinese foxgloves. Rehmannia flower for months and are perennial, but are not terribly hardy. Mine have survived in an unheated greenhouse for the last four years though. They have survived very intermittent watering too and I read that they are even good in dry shade, so I might try some in the front garden. 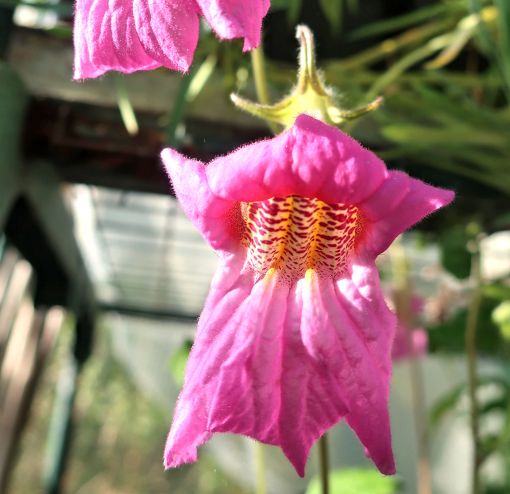 Do you see that beautiful blue pollen? Hard to resist such a pretty little plant. So I bought a large pot of Veronica in a clearance sale last autumn with a view to splitting it into many new plants in spring. That was the plan, but then I forgot about it and bought two more (smaller) plants a month ago when the new perennials came into the garden centres. Oops! And now I have an abundance of Veronica. Good thing they are lovely! 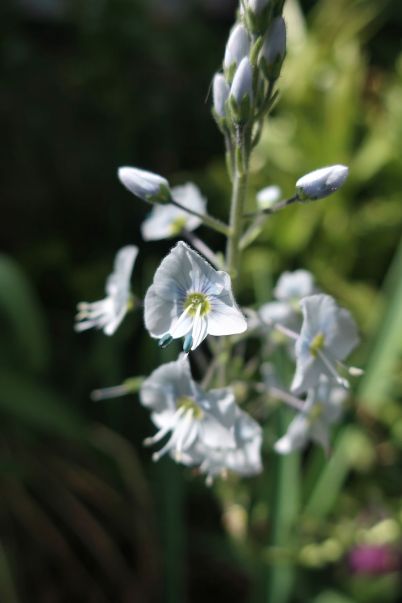 I’ll finish this post by sharing an extra picture. This is Sadie after this morning’s dog walk in torrential rain. She managed to get covered in oil-seed rape petals and with the excessive wet, they are fairly stuck to her coat. Makes a change from washing mud off I suppose … there may be a confetti effect on the carpet over the next day or two!

Sadie, covered in bright yellow oil-seed rape petals, looks like she has been to an Indian wedding

Hope you are enjoying your gardens this weekend!

22 Responses to Six on Saturday – Rhubarb and Sweet Cicely